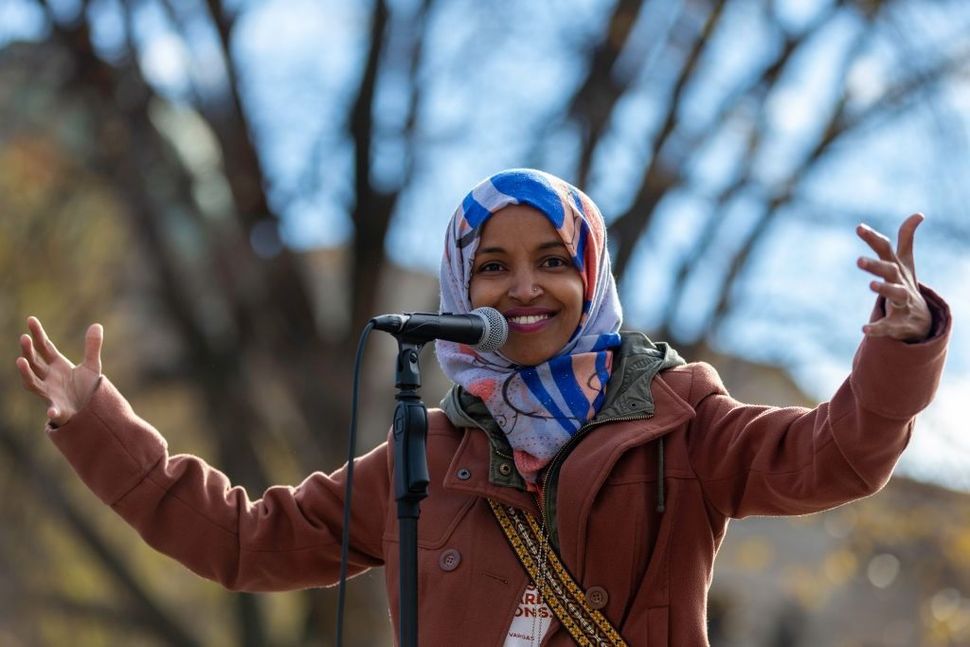 Ilhan Omar speaks to a group of supporters at the University of Minnesota, November 2, 2018. Image by KEREM YUCEL/AFP/Getty Images

Rep. Ilhan Omar, one of the first Muslim women elected to Congress, arrived in Washington to great fanfare in January. But soon after, she began to be criticized in the national media for a 2012 tweet saying that the Jewish state had “hypnotized the world” – a message that many felt echoed age-old anti-Semitic tropes of Jews using magic powers to nefariously control events.

She defended her comments when asked about them on CNN in January, but apologized a few days later after being called out in a piece by New York Times opinion columnist Bari Weiss.

“In all sincerity, it was after my CNN interview that I heard from Jewish orgs that my use of the word ‘Hypnotize’ and the ugly sentiment it holds was offensive,” Omar tweeted at Weiss.

But the claim she made “in all sincerity,” about only just having been educated about the tweet’s problems, is not true. In fact, multiple local Jewish leaders had confronted her about it during a two-hour-long closed-door meeting during her 2018 primary campaign.

“In fact, she brought it up in our meeting, before we got a chance to bring it up ourselves,” Minnesota state senator Ron Latz, who hosted that meeting with Omar in his home, told the Forward. “[Her January statement] is incorrect. It’s very disappointing.”

Omar’s office did not respond to multiple requests for comment, including a question about the timeline discrepancy.

Some Jews in her Minneapolis-area congressional district were already skeptical of Omar’s commitment to fighting anti-Semitism, wondering if it’s a strongly held belief or just lip service in response to bad PR. Her latest controversy, caused by tweets on Sunday inaccurately claiming that the pro-Israel lobby AIPAC pays politicians to support Israel, has only raised concerns further.

Latz declined to share details about who else was at the meeting or what was said, but did say that much of the evening involved people explaining why the “hypnotized” tweet was anti-Semitic. Latz said that Omar refused to delete the tweets and stood by what she said. He came away troubled by her responses. The tweet has still not been deleted.

Omar apologized for her latest anti-Semitism controversy on Monday, but many in the local community aren’t mollified – they say they’ve heard it before.

“If you claim you are sensitive to these things, yet you keep repeating behavior that displays lack of sensitivity, at one point is that emblematic of an underlying attitude?” Latz asked.

Latz was one of many local and national Jewish leaders who have criticized Omar for her AIPAC statement, which echoed conspiracies about Jews using money as a means to control governments.

Many are still upset that Omar came out after the election in November in favor of the boycott, divestment and sanctions campaign against Israel – despite the fact that she had said in a primary debate held at a local synagogue that BDS “wasn’t helpful” in creating conditions for a two-state solution. In a lengthy text exchange with the editor of the local Jewish news site TCJewfolk, she denied that her decision not to admit her support for BDS was an act of political expediency.

“At this point, I think I will reserve my personal ‘acceptance’ of her latest ‘apology’ until I actually see a distinct change in her behavior going forward – and given her track record, I will not be holding my breath,” local artist Dan Israel wrote in TCJewfolk on Wednesday.

Temple Israel, the largest synagogue in the state, condemned Omar’s comments on Monday and called on her to “speak with our community face-to-face.” Senior rabbi Marcia Zimmerman told the Forward that Omar had reached out to her on Wednesday and scheduled a meeting.

“There’s many steps to teshuvah,” she said, using the Hebrew word for repentance. “Teshuvah requires not only an ‘I’m sorry,’ but also one-on-one conversations, and a lot of understanding, and a lot of listening.”

The Jewish Community Relations Council of Minnesota and the Dakotas issued a lengthy condemnation of Omar’s Israel-lobby tweets on Sunday. When asked if the group had accepted her apology, JCRC executive director Steve Hunegs replied, “Actions speak louder than words.”

“We’ll see how we proceed going forward,” he continued. “We’ll have a chance to meet with and talk with her.”

Hunegs said that Omar had not met with his group since she came out in support of BDS.

In her statement apologizing for her AIPAC comments, Omar said that she was “grateful for Jewish allies and colleagues who are educating me on the painful history of anti-Semitic tropes.”

One such ally who did accept her apology and is continuing to stand by her is Carin Mrotz, the executive director of a local Jewish progressive advocacy group that held a training session on anti-Semitism for Omar and her staff during the primary. Mrotz told the Forward that Omar was “learning in public, and it’s an ongoing process.”

Mrotz’s group, Jewish Community Action, regularly holds workshops to help train progressive activists in identifying anti-Semitism. A campaign worker arranged for Omar and her senior campaign staff to have one of those sessions.

“I worked with them to give a briefing about what anti-Semitism is – it’s not just hating Jews, it’s an ancient, centuries-old practice of isolating and marginalizing the Jewish community, making us scapegoats, portraying us as significantly more powerful than we are,” Mrotz told the Forward.

“We also did talk about how conversations about Israel can be really fraught,” she continued. Criticism of Israel is not inherently anti-Semitic, but often, “when Jews are responding to criticism of Israel, we’re not responding purely from an academic standpoint, we’re responding from a perspective of generations of trauma.”

Others who have stepped in include two fellow Democratic freshman members of Congress, who have faith that Omar has learned from her mistake and is sincere in her opposition to anti-Semitism.

Max Rose of New York was the first Democrat to come forward and criticize Omar for anti-Semitism, but said on Tuesday that he had spoken with her about the issue and accepted her apology. He also called out the hypocrisy of the Republican Party for making hay of anti-Semitism, noting that House Minority Leader Kevin McCarthy had used Jewish billionaires as boogeymen in an October campaign commercial – itself reflective of anti-Semitic tropes. “There’s some hypocrisy there too,” Rose said. “That caucus can’t be chickens—- in the face of anti-Semitism either.”

And Dean Phillips of Minnesota, who represents a district neighboring Omar’s, said in a statement that he had spoken privately to her about his offense at her comments “in the hopes of converting a painful experience into a learning opportunity and a mutual commitment to pursue understanding.”

To be sure, Omar has often made statements that many in the Jewish community have welcomed – condemning anti-Semitism on Twitter, attending the JCRC annual benefit, and appearing at a local community vigil after the Pittsburgh synagogue massacre.

Mrotz pointed out that Omar grew up in a Somali refugee camp and then moved to Minnesota, which has a Jewish population of only 45,000. It’s not unreasonable for Omar to have not already developed a nuanced understanding of anti-Semitism through prior interactions with Jews, she argued. “I think our Jewish partners on the East Coast really underestimate the isolation of Midwestern Jews,” she said. “I encourage them to be patient – I work with progressives in partnership who have never really been in relationship with Jews before. We sit in coalitions where our organizer is the only Jew in the room.”

While House Speaker Nancy Pelosi and other Democratic leaders also criticized Omar, they have so far ignored calls from Republican and conservative Jewish groups to remove Omar from her spot on the House Foreign Relations Committee. But given the non-Israel-related controversies she’s also stirred up – she was widely condemned for claiming without evidence that Republican Sen. Lindsey Graham is somehow “compromised” – it’s unclear what would happen if another incident were to occur.

Mrotz said that she had spoken on the phone with Omar on Tuesday.

“She was significantly more optimistic than I would have expected, considering the strain that is probably hitting her office,” she said. “She talked about how this was unfortunate, and perhaps it’s an opportunity for learning, for folks to start learning about anti-Semitism, and for a better, more nuanced conversation about money in politics.”

But Latz was more skeptical.

“We already know her attitude,” he said. “We’ve seen it displayed many times now. The best we can hope for is that she mitigates her expression of it.”