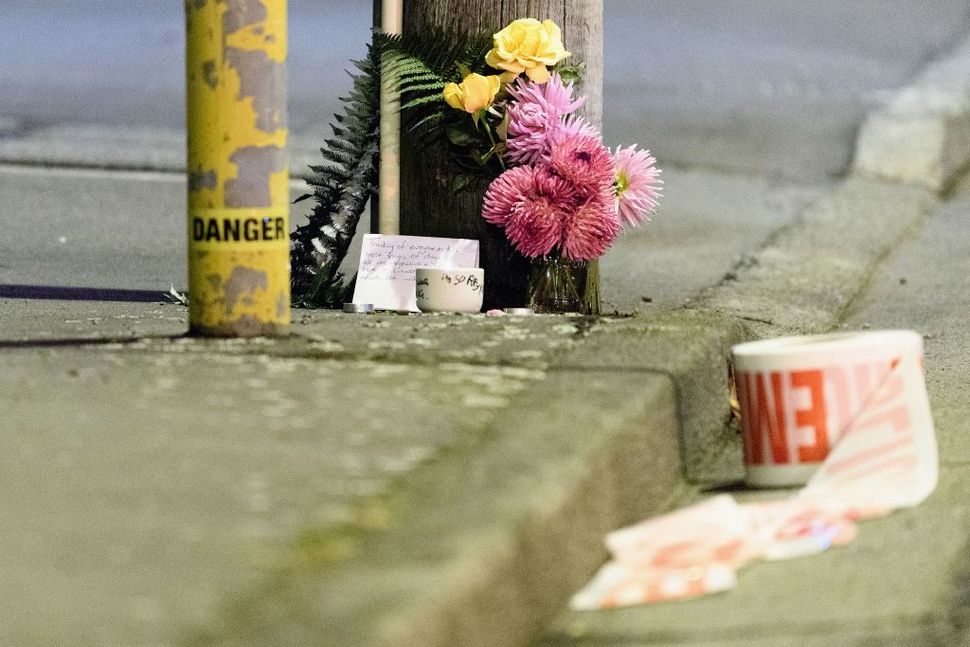 A floral tribute is seen on Linwood Avenue near the Linwood Masjid on March 15, 2019 in Christchurch, New Zealand. 49 people have been confirmed dead and more than 20 are injured following attacks at two mosques in Christchurch. Image by Kai Schwoerer/Getty Images

Synagogues across New Zealand cancelled Shabbat services out of precaution after a shooter killed 49 worshippers at a mosque in that country on Friday.

The leaders of Auckland Hebrew Congregation announced on their Facebook page that services there, as well as at other synagogues in Auckland and Wellington, would be cancelled after the shooting in Christchurch.

The statement added that New Zealand Police recommended cancelling all services as the security force was “unable to guarantee us protection this evening as they mobilize to support Christchurch and well as protect Mosques throughout New Zealand.”

Mosques were also closed throughout the country for similar reasons.

Isaac Herzog, the chairman of the Jewish Agency for Israel, tweeted that it was the first time services had been cancelled in the history of New Zealand’s Jewish community, which dates back to the 1830s.

For the first time in history synagogues in NZ are closed on Shabbat following the shocking massacre of Muslims in Christchurch. The Jewish Agency and the NZ Jewish Council stand in solidarity with the bereaved families. We are united in fighting violent hatred and racism.

The president of the New Zealand Jewish Council told JTA that they were “sickened and devastated” by the attack.

“We offer our full assistance and support to the Muslim community and stand united with it against the scourge of terrorism and racism, which we must do all we can to banish from New Zealand,” said president Stephen Goodman.