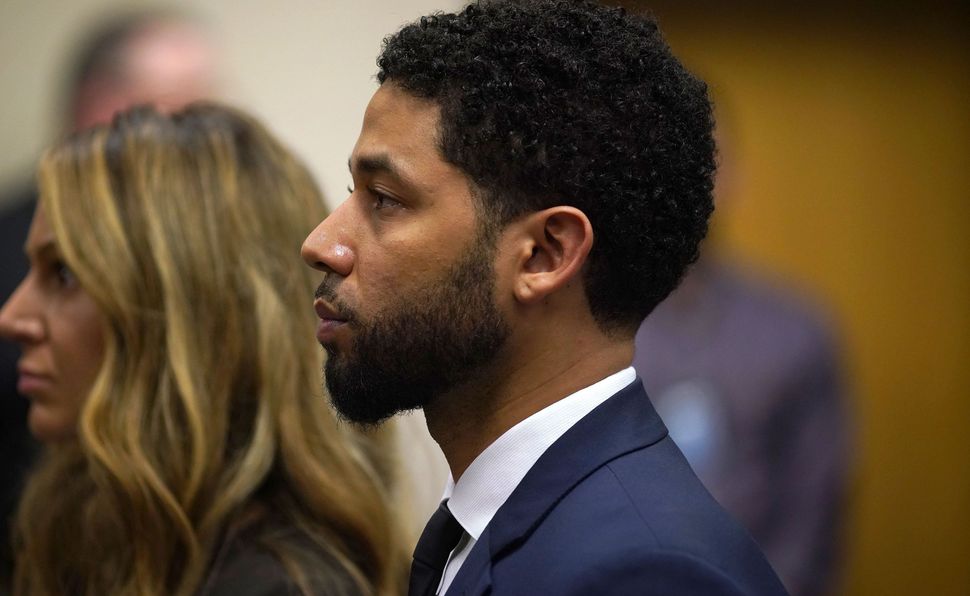 Jussie Smollett at a plea hearing earlier this month. Image by Getty

Chicago prosecutors dropped all charges against actor Jussie Smollett Tuesday morning without explanation, and sealed the records of his case, the AP first reported. The abrupt drop in the case came nearly two months after the “Empire” actor first claimed that he had been the victim of a racist and homophobic attack by men in MAGA hats, which police later said was made up.

“After reviewing all of the facts and circumstances of the case, including Mr. Smollett’s volunteer service in the community and agreement to forfeit his bond to the city of Chicago, we believe this outcome is a just disposition and appropriate resolution to this case,” the Cook County State’s Attorney’s Office said in a statement.

Smollett, who has maintained that the incident he reported was real, and pled not guilty to 16 charges stemming from the incident, spoke outside the Cook County Courthouse Tuesday.

“I have been truthful and consistent on every single level since day one,” Smollett said. “I would not be my mother’s son if I was capable of one drop of what I’ve been accused of.”

Patricia Brown Holmes, Smollett’s attorney, said Tuesday that the state had moved to seal the records in Smollett’s case.

“I have no idea what occurred in this case and why it occurred,” Brown told reporters. “I can just say things seemed to spiral somewhat out of control. We’ve gotten to a result that is the right result in this case and we’re happy for that.”

The attack reported by Smollett, who is Jewish, became national news immediately after it happened. But the story took a sharp left turn after Smollett was arrested in February for allegedly filing a false police report. Police said at the time that Smollett had paid two Nigerian brothers to pretend to be Trump supporters and accost him. Smollett had originally told police that two men attacked him, called him racist and anti-gay epithets, poured an “unknown chemical substance” on his head and wrapped a rope around his neck.

The confusion around Smollett’s case indeed spiraled, and national media figures took sides on whether he was telling the truth. Conspiracy theories about Smollett’s alleged false attack abounded. Smollett was dropped from the remainder of “Empire’s” season.

Holmes underscored Tuesday that the dropped charges were not part of a deferred prosecution by the state, and that the case was effectively done.

After news of Smollett’s charges being dropped flashed across the internet, right-wing media had a meltdown, Right Wing Watch reported. Far right media figures called the change in the case an example of “Democrat privelege,” proof that “‘white privilege’ is a racist lie,” and a “perfect example of how our justice system is broken.”