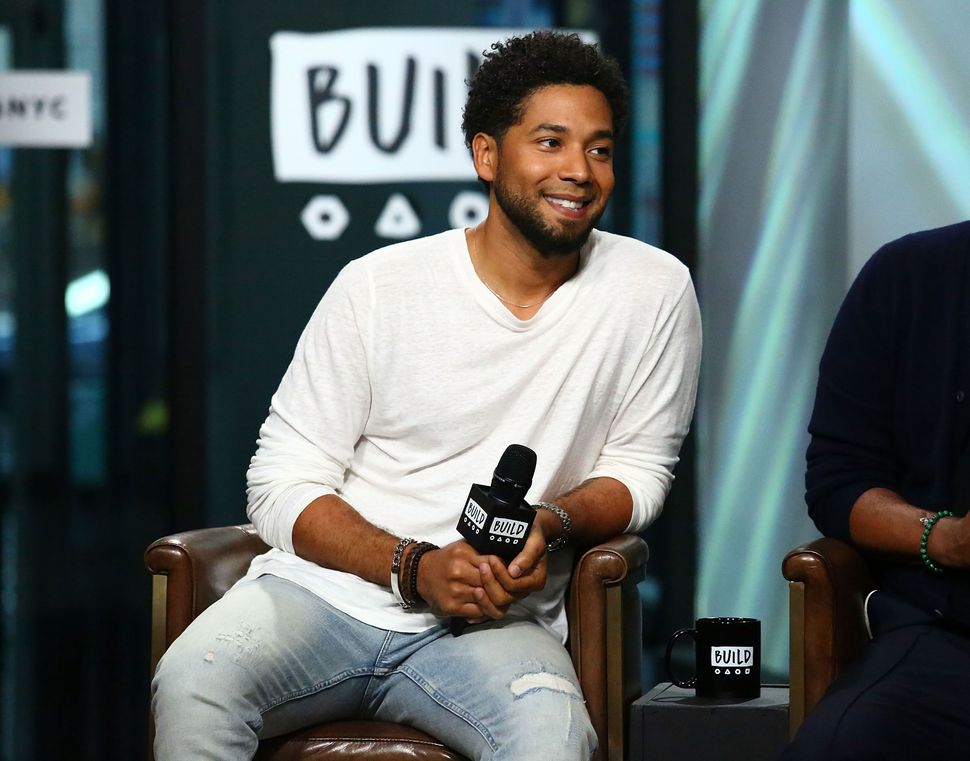 In late January, “Empire” actor Jussie Smollett, who is black and gay, with Jewish heritage, was hospitalized after being attacked by two men who first shouted racial slurs, then beat him physically, poured a chemical substance on his face, and placed a noose around his neck, Chicago Police reported.

Smollett told police that his attackers shouted, “This is MAGA country,” in reference to the President’s slogan.

The attack, the police wrote, was to be treated as “a possible hate crime.”

Now some sources have claimed that the attack was a hoax orchestrated by Smollett himself. On February 13, Vox reports, police arrested two brothers, who were being treated as “persons of interest.” It became clear that the two brothers knew Smollett professionally, and both were released, with the Chicago Police Department saying that new findings had “shifted the trajectory of the investigation.”

Multiple publications quoted unnamed sources who said that Smollett staged the attack, though on February 14 Chicago Police spokesman Anthony Guglielmi tweeted that the hoax reports are “unconfirmed.” He added that reporting by ABC7Chicago, which claimed to use Chicago police as sources, was “uninformed and inaccurate.”

On the 17th, Guglielmi tweeted that detectives for the Chicago PD will interview Smollett again, writing, “While we are not in a position to confirm, deny or comment on the validity of what’s been unofficially released, there are some developments in this investigation and detectives have some follow-ups to complete which include speaking to the individual who reported the incident.”

The alleged attack has triggered an avalanche of responses as details have been released. One consistent factor has been pushback on social media against the reporting of the story.

Though responses to coverage have been consistently critical, the criticism itself has shifted on its axis. Initially, critics expressed disgust over reporting of an “alleged” attack and a “possible” hate crime. Later, critics berated media for reporting the alleged attack at all.

Possible hate crime? This is horrific. And a hate crime. Ugh.

They tied a rope around him, doused him in chemicals, yelled racial & homophobic slurs. Then yelled “This is MAGA country”.

Call it what it is. A hate crime by racist pieces of SHIT.

this is the first article i’ve seen that actually calls the attack on Jussie Smollett what it was: racist and homophobic https://t.co/Nh60mVBR6q

Yet as accusations against Smollett have surfaced, others have called the media culpable for treating the Smollett story with too little scrutiny:

The Jussie Smollett debacle shows, yet again, that the media are more interested in pushing a left-wing agenda than sticking to facts. https://t.co/NO9OB5sTBo via @BenShapiro pic.twitter.com/nftCPjyuK9

Odd that this story has been quietly evaporating from the liberal media. #JusticeForJussie! https://t.co/zs6rNq60Uw

New column—> Fakers Prefer to Play Victims Now, and the Press and Politicians Buying It Are Playing Into Trump’s Hands https://t.co/JuiPHAScDW

The criticism, which comes primarily from the left, that journalists and media groups should not hesitate to label clearly racist events, for example, as “racist” instead of “racially charged,” has become common. Criticism primarily from the right, that media is fixated on victims and addicted to stories about identity politics, is also nothing new.

But there’s no winning in the Smollett case anyway. It ends either with the vindication of a man who was brutally attacked and belittled, or the revelation that he lied will cast suspicion on anyone who comes forward as a victim of a hate crime.