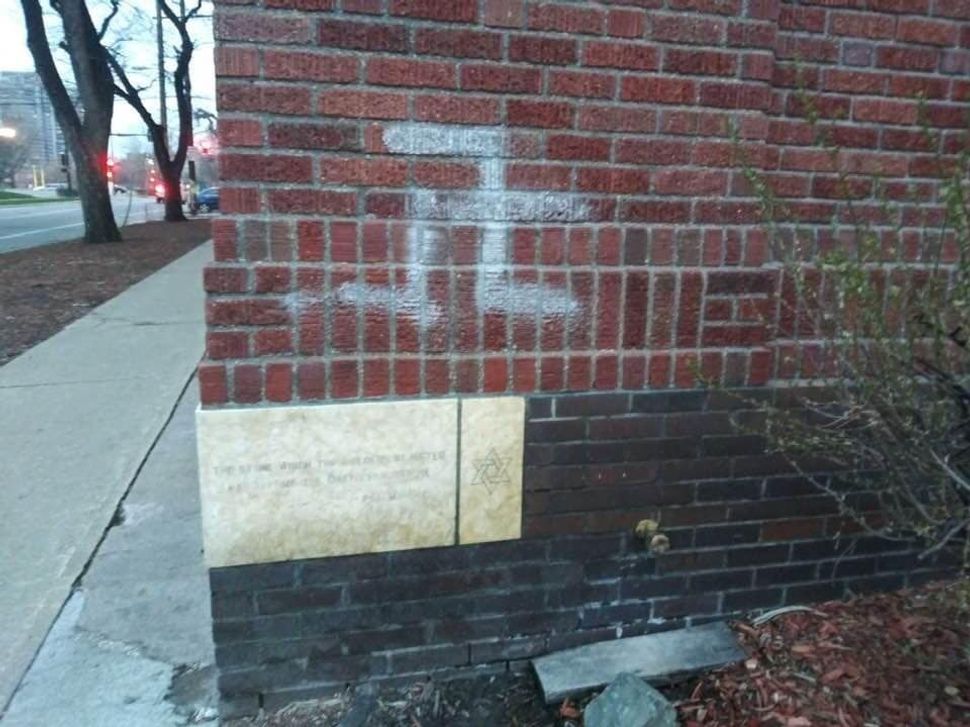 A swastika was spray-painted on the walls of Church in the City-Beth Abraham, a Messianic Jewish church in Denver. Image by Mike Schoening/Facebook

A Messianic Jewish church in Denver was vandalized on Tuesday with a spray-painted swastika and other graffiti, the Denver Post reported Wednesday.

The vandalism took place at Church in the City-Beth Abraham, which according to its website holds a contemporary Christian service on Sundays and a Messianic Shabbat service on Saturdays.

A suspect was arrested on Wednesday after allegedly being caught drawing more graffiti on the building’s trash cans, local news station Denver7 reported. Police do not know whether that was the same person who painted the graffiti a day earlier, the Post said, but pastor Michael Walker told the post that the arrested man had paint on his hands. The suspect is reportedly being held for investigation of assault on a police officer, resisting arrest and property crime.

“It feels hateful,” Walker said. “You watch it on the news, but when it hits you at home, it’s really hateful.”

The Anti-Defamation League condemned the incident. “We are deeply saddened by the vandalism at Church in the City-Beth Abraham,” ADL Mountain States Regional Director Scott Levin said in a statement. “All people deserve to worship in peace and safety, free from any attempt to intimidate them or prevent them from practicing their faith. We commend the Denver Police Department for investigating the incidents as potential hate crimes.”

So-called Messianic Jews, whose theology is not accepted by any other Jewish denomination, believe that Jesus is the messiah and the son of God. The movement most recently attracted news after Vice President Mike Pence invited a messianic “rabbi” to lead a prayer at a Michigan campaign rally.