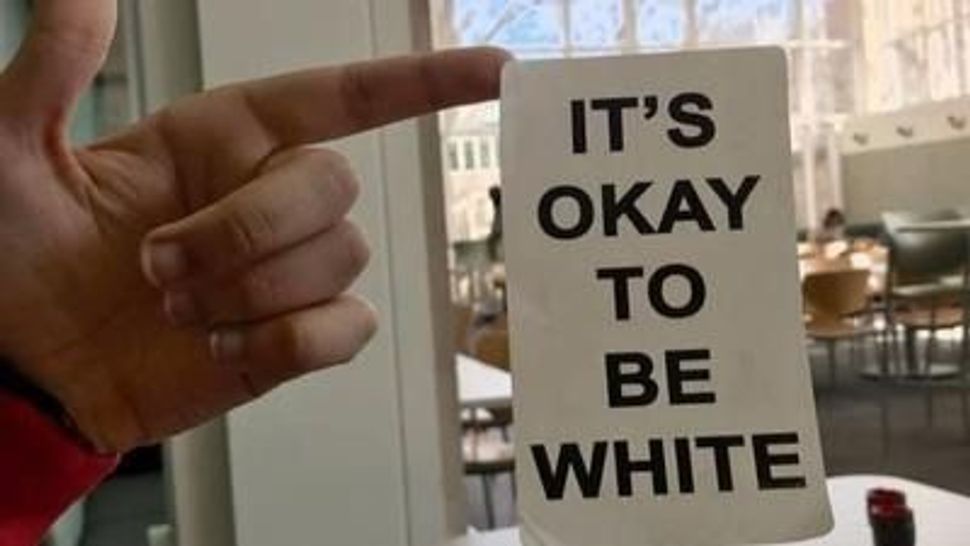 A sticker with the white nationalist phrase “It’s okay to be white” was found at a dining hall at Northwestern University. Image by Rishi Mahesh/Facebook

Campus police at Northwestern University are investigating who left a sticker with the white nationalist catchphrase “it’s okay to be white” in a dining hall.

Student Rishi Mahesh posted a picture of the sticker, which he said he found in Allison Dining Hall. “For anyone who is unfamiliar, ‘it’s okay to be white’ is not a joke, the seemingly innocuous phrase is the slogan of an alt-right white supremacist group,” he wrote in a social media post, according to the Chicago Tribune. “As a tool, the slogan is meant to prompt backlash, to divide people with the conversation of IS it ‘ok to be white.’”

Flyers with the same phrase were found on campus in November 2017, the Daily Northwestern reported.

“The University is concerned and disturbed to hear that someone may have left a symbol often used by white supremacist groups on our campus,” the university said in a statement emailed to students. “The Northwestern Police Department is actively looking into the matter. While we value freedom of expression, we also must stand together to protect our values of diversity and inclusion. Posting a symbol of hate and intolerance on our campus violates our values and the core commitments of the University. Any act of hate, whether intentional or careless, will not be tolerated.”

Flyers with the slogan, popular among white nationalists, have popped up on campuses across the country, the Anti-Defamation League reported last year, citing posters spotted on 14 universities in 12 states in a one-week span.

Around 8,300 undergraduate students attend the elite Illinois university, including 1,200 Jews, according to the Forward College Guide.