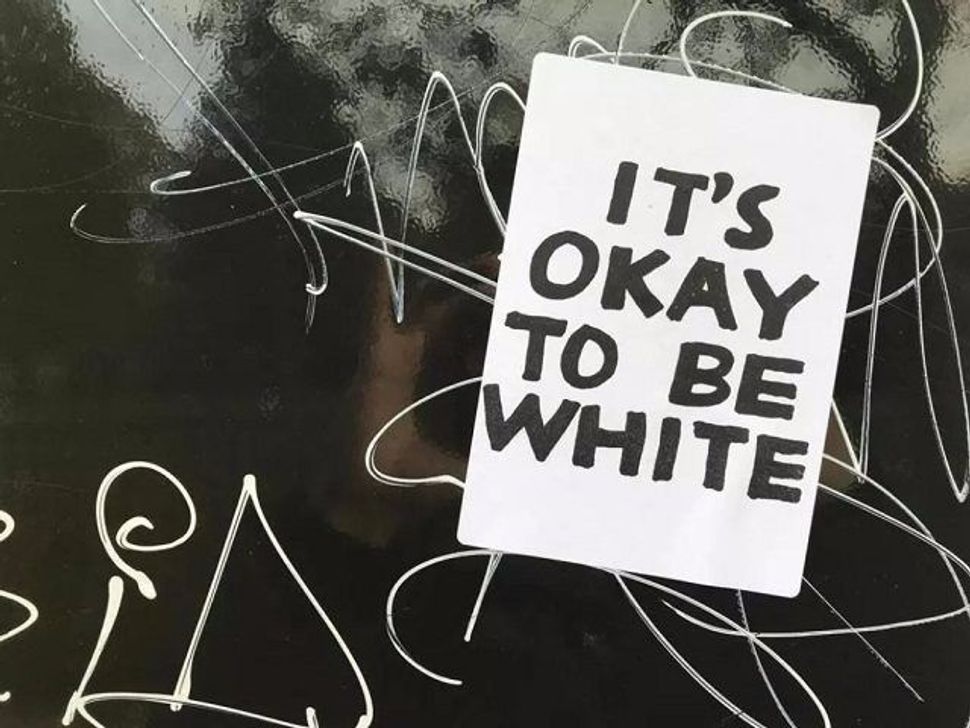 Earlier this month, Fox News host Tucker Carlson railed against what he said were liberals sowing “racial divisions” throughout America. Carlson riffed off a Washington Post article about a principal at a Maryland high school investigating an incident in which someone posted flyers proclaiming, “It’s Okay To Be White.” Carlson was exasperated. What was so controversial about this?

“Being white, by the way, is not something you can control,” Carlson said. “You shouldn’t attack people for it, and yet the left does constantly — in case you haven’t noticed.”

Somewhere, “alt-right” trolls and meme posters cheered: One of their meme campaigns, conceived in the dark corners of an online chatroom late last month, was making headlines — and being defended on a prominent news network. Carlson’s defense of the “It’s Okay To Be White,” flyer was yet another example of how the “alt-right” creatively disguises and popularizes white nationalist ideology.

While the meme is only about a month old, it follows a certain pattern of slogans and images promulgated by the white nationalist “alt-right.” For example, the white nationalist group Identity Evropa has been ramping up campus outreach efforts by circulating flyers that say, simply, “Only We Can Be Us” or “Become Who You Are.” Other posters in this vein include messages like, “I want you to love who you are” and “Don’t apologize for being white.”

Identity Evropa and like-minded “alt-right” leader Richard Spencer preach boilerplate white nationalism. They view the white nation as existentially imperiled, threatened by a “rising tide” of brown and black people — with Jews either orchestrating or benefiting from the downfall of whites.

While Spencer is more plainspoken about his dreams of creating a “white ethno-state,” free of Jews and any person of color, the 4chan crowd that launched the “It’s Okay To Be White” meme shroud their beliefs in layers of performative provocation.

Late last month, posts began circulating on the site 4chan, calling for members to place posters with the slogan “It’s Okay To Be White” in public places as “proof of concept” that a “harmless message” would cause a “massive media sh*tstorm.” Some took to calling it “Operation White.”

The troll operation was launched Halloween night, according to screenshots of a 4chan post, and detailed seven simple steps. The plan? Make “normies realize that leftists & journalists hate white people, so they turn on them.” A hashtag circulated, #IOTBW.

4channers printed out the memes of the slogan and distributed them in public spaces, closely following media reactions. When network news began reporting on the emergence of the flyers, describing them often as white supremacist slogans, the trolls cheered. They had provoked — or “triggered,” in “alt-right” slang — their perceived enemies in the culture war.

Can anyone tell me why white people are writing ‘it’s ok to be white’ on profile pic???

Spencer’s website Altright.com called the campaign “genius in its simplicity” for how it attracted the attention of people like Carlson and caused local news to “freak out.”

While it may have felt like an innovation, Anti-Defamation League post showed that the phrase itself has a “fairly long history in the white supremacist movement.” ADL has tracked white supremacist flyers featuring the phrase “It’s okay to be white” as long ago as 2005. In 2012, United Klans of America, a Ku Klux Klan organization, even used the hashtag #IOTBW on Twitter.

Veteran white supremacist and former Ku Klux Klan head David Duke also praised the campaign on his regular broadcast. It was an effective way, he said, of showing what he called the contradictions and hypocrisy of Jews — who champion the ideal of diversity but “persecute” whites. “Isn’t that the most effective propaganda,” Duke said, “when it shows the contradictions of the enemy?”