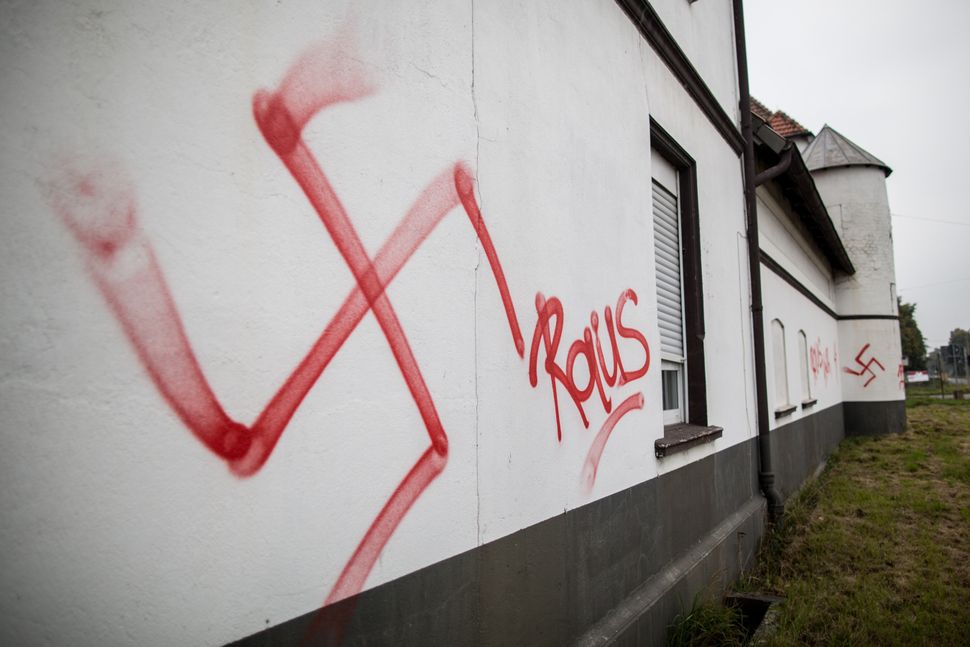 Swastika sprayed on asylum-seeker’s home in Germany in 2015. Image by Getty Images

In the United States, the messaging service WhatsApp is a lifeline for the ultra-Orthodox; the only social media tool in widespread use in the community.

But in Germany, according to a new report from BuzzFeed News, the Facebook-owned app is being used by far-right extremists to share Nazi propaganda.

In an article published Thursday, BuzzFeed reported that far-right Germans are using a function in WhatsApp that allows them to create so-called “stickers” to share Nazi symbols and anti-Jewish propaganda in private WhatsApp groups.

“As soon as WhatsApp made it possible to create and use stickers, right-wing extremists flood their group chats with Nazi symbolism,” a German advocacy group called the Jewish Forum for Democracy and Against Anti-Semitism said last fall, according to BuzzFeed.

WhatsApp told BuzzFeed that it could not monitor private messages, but encouraged users to report anti-Semitic content.

In a statement to the Forward, a WhatsApp spokesperson said: “We condemn this hatred in the strongest terms. As a messaging service, we do not have access to the private messages people share nor do we provide a search function within WhatsApp to find any groups. We’ve also made it easy for people to report a problem to WhatsApp to help keep our platform safe.”

WhatsApp has more than 1.5 billion users worldwide. The Forward first reported in 2014 on its unexpected popularity in the ultra-Orthodox community, where religious leaders discourage the use of the internet and social media.

Update, 11:55 A.M.: This story has been updated to include a statement from WhatsApp.