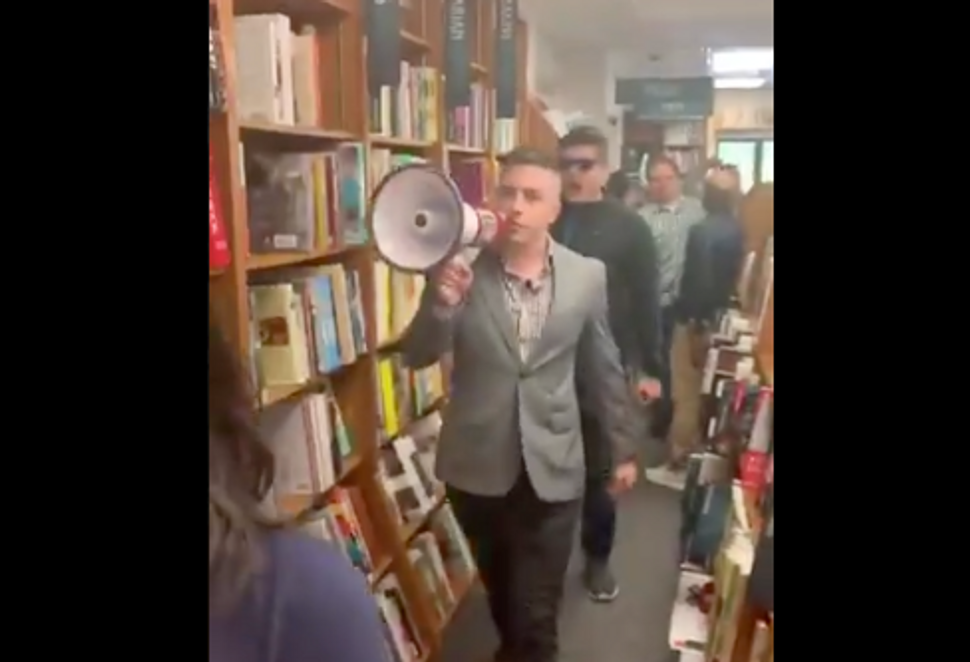 Marchers from the white nationalist American Identity Movement interrupt a talk about whiteness at the Politics & Prose bookstore in Washington, D.C. Image by Catherine Wigginton/Twitter

White nationalists stormed a Washington, D.C. bookstore on Saturday, chanting “This land is our land” to interrupt an author speaking about whiteness and racism.

About ten people came into the store Politics and Prose, where psychiatrist Jonathan M. Metzl was there to discuss his book “Dying of Whiteness: How the Politics of Racial Resentment is Killing America’s Heartland.” The marchers, who are allegedly affiliated with the American Identity Movement, the white nationalist group formerly known as Identity Evropa, gathered in front of Metzl as their leader took a megaphone and praised his movement, according to The Washington Post.

“You would have the white working class trade their homeland for handouts,” the leader said. “But we, as nationalists, and identitarians, can offer the workers of this country, a homeland, our birthright, in addition to health care, good jobs and so forth.”

The marchers then left, chanting “this land is our land,” after being booed by the audience.

“The audience was not particularly receptive,” store co-owner Bradley Graham told the Post. “We just let them have their say, expecting they would leave, and they did. It doesn’t often happen here. It’s a sign of the times.”

Metzl told the Post that when the protesters came in, he had been talking with an audience member who had helped his father and grandfather escape from Nazi-occupied Austria. “I was saying how much stronger America is when we think about our responsibility to people in need,” he said. “At that point, the Nazis walked into the talk.”

Soooooo I’m at @PoliticsProse for #IndependentBookstoreDay and a group of white nationalists just interrupted an author’s talk on how the politics of racial resentment is killing the heartland. pic.twitter.com/G0tOdE6MIy