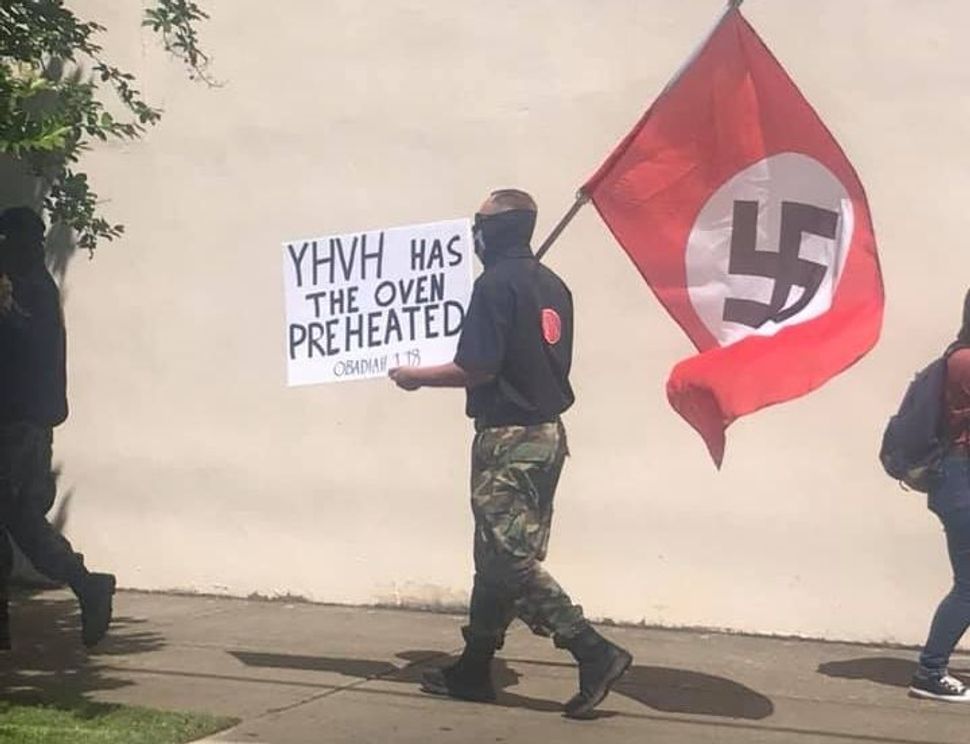 One of the marchers that interrupted a Holocaust Remembrance event in Russellville, Arkansas this week. Image by Facebook/Jasmin Joy Elma Lyon

A Holocaust Remembrance Day event in a small Arkansas city was interrupted by a group of white supremacists, a local news station reported.

About 8-12 men walked by the Holocaust Remembrance event carrying swastika flags, a white cross and posters with anti-Semitic slogans.

The appearance of the white supremacist group comes as Arkansas Technical University, located in Russellville, is being criticized for creating a scholarship in honor of a deceased professor who many have claimed taught Holocaust-denying books in his class.

A member of the group, called Shieldwall, told a reporter that their appearance at the Holocaust Remembrance event was in support of the legacy of that professor, Michael Link.

“The rally that we held was a protest against the ADL (Anti-Defamation League), and Dr. Sarah Stein’s attempts to intimidate and blackmail Arkansas Tech University into removing Dr. Michael Link’s name from the scholarship he endowed,” said Billy Roper, a network coordinator for Shieldwall.

But in a letter sent to the school last week, the ADL alleges that Link consistently gave students books that questioned the “myth” of the Holocaust, and participated in online forums where he denied the historical reality of the Holocaust. The university has said that it has no evidence that Link was a Holocaust denier, but appears to have elided evidence that others had raised concerns about Link’s beliefs about the Holocaust more than ten years ago.

People present at the event this week posted pictures of the white supremacists, many of whom wore camouflage-print clothing and masks and hats that obscured their faces.

Police said that no one was injured during the event.

“We will accept you if you accept us,” Griffis, the Holocaust memorial event planner, told a reporter. “We want you to have your life, but we want our life also, and we want the truth to be known about history.”

Russellville is something of a hot spot for white supremacists. In February, authorities arrested 54 members of a white supremacist gang in and around Russellville. The group, called the New Aryan Empire, has been fingered for murders, violent assaults, kidnappings and meth distribution in the area.