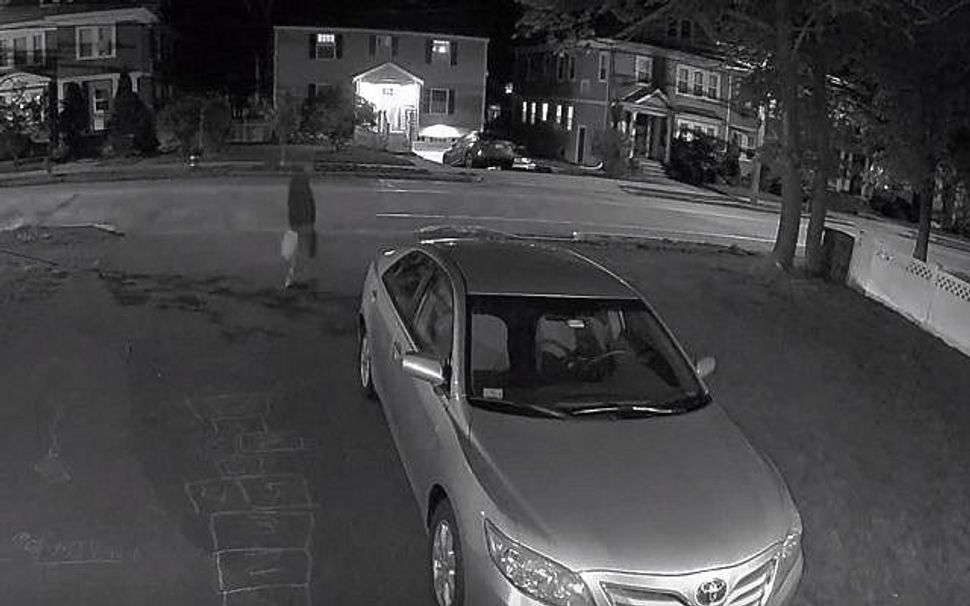 Security camera footage shows an individual police want to question in connection with a fire at the home of a rabbi, which serves as a Chabad community center, in Arlington, Massachusetts on May 11, 2019. Image by Screenshot

BOSTON (JTA) — A fire outside the suburban Boston home of a rabbi that serves at a Chabad center is being investigated as a possible hate crime.

Police in Arlington, Massachusetts, have asked for the public’s help in identifying a person caught on a neighbor’s video camera walking away from the home Saturday night around the time of the fire.

Firefighters put out the small fire that burned the shingles of one side of the Center for Jewish Life in Arlington-Belmont, home to Rabbi Avi Bukiet, his wife and their three children.

Police and town officials have no evidence yet that the location or its Jewish homeowners were targeted because of their religion, but “are leaving open and actively investigating the possibility of a hate crime,” according to a statement from Julie Flaherty, the town’s acting chief of police, and Christine Bongiorno, director of the Health and Human Services Department.

Police have added extra patrols to the home and the area.

Arlington, which is less than 10 miles northwest of Boston, has seen a number of anti-Semitic and racist incidents in recent years, including a widely reported incident one year ago in which 14 juveniles admitted to painting anti-Semitic and homophobic graffiti and vandalism at the public high school.

Rabbi Bukiet agrees that the police should not yet sound the alarm that this is a hate crime, but expressed his concern that he and his family were targeted.

“In my heart of hearts, it feels that this was something that was perpetrated because we are the Center for Jewish Life,” Bukiet told the Jewish Telegraphic Agency. “But I can’t say yet for certain and will wait” for the town to complete its investigation.

The center, the town’s only synagogue, holds regular Shabbat services and has a children’s school, according to Bukiet, who said they are continuing their activities but with added security, including plainclothes police.

Bukiet has been heartened by the tremendous outpouring of support from townspeople, religious leaders of all faiths and from Boston’s Jewish community leaders.

“We are not stopping, we are not slowing down,” Bukiet said. “We have to show we are here and united and we not going anywhere,” he said.

Fire and police personnel had responded to an automatic fire alarm at his center. After smelling smoke and hearing the alarm, the Bukiet family left the house and waited for the Fire Department in the family’s car, according to the town’s official website.