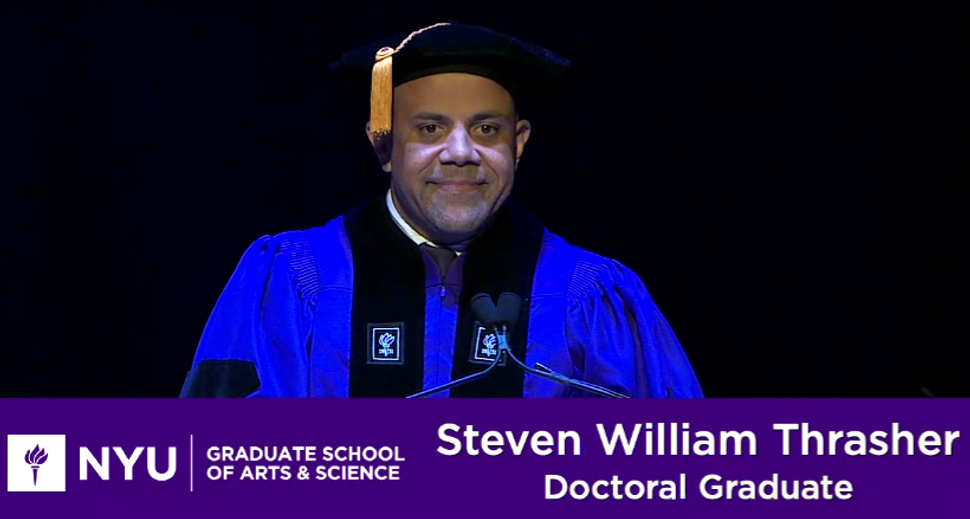 (JTA) — A speaker at a New York University doctorate convocation ceremony praised campus organizations that support the Boycott, Divestment and Sanctions movement against Israel and called Israel an apartheid state.

Steven William Thrasher received his doctorate in American studies from the university’s Department of Social and Cultural Analysis.

“I am so proud, so proud of NYU’s chapters of Students for Justice in Palestine and of Jewish Voice for Peace, and of GSOC (Graduate Student Organizing Committee), and of the NYU student government, and of my colleagues in the Department of Social and Cultural Analysis for supporting the Boycott, Divestment, and Sanctions (BDS) movement against the apartheid state government in Israel — because this is what we are called to do,” Thrasher said in his address, which was posted on social media.

“This is our NYU legacy — that we are connected in radical love, and we have a duty and a privilege in this position to protect not the most popular amongst us, but the most vulnerable amongst us on every campus where we serve in every community where we live, in every place that we work,” he said.

The Department of Social and Cultural Analysis earlier this month voted to boycott the NYU satellite campus in Tel Aviv over Israel’s treatment of the Palestinians and their universities. The NYU student government has considered resolutions to boycott and divest from Israel. And last month the Students for Justice in Palestine received a President’s Service Award during a ceremony that the president skipped.

Thrasher is a professor at Northwestern University’s Medill School of Journalism, Media, Integrated Marketing Communications, where he holds the Daniel H. Renberg Chair, an endowed professorship focusing on social justice in reporting with an emphasis on issues relevant to the LGBTQ community.