Should A Historic German Church Remove An Anti-Semitic ‘Jewish Pig’ Carving From Its Facade? 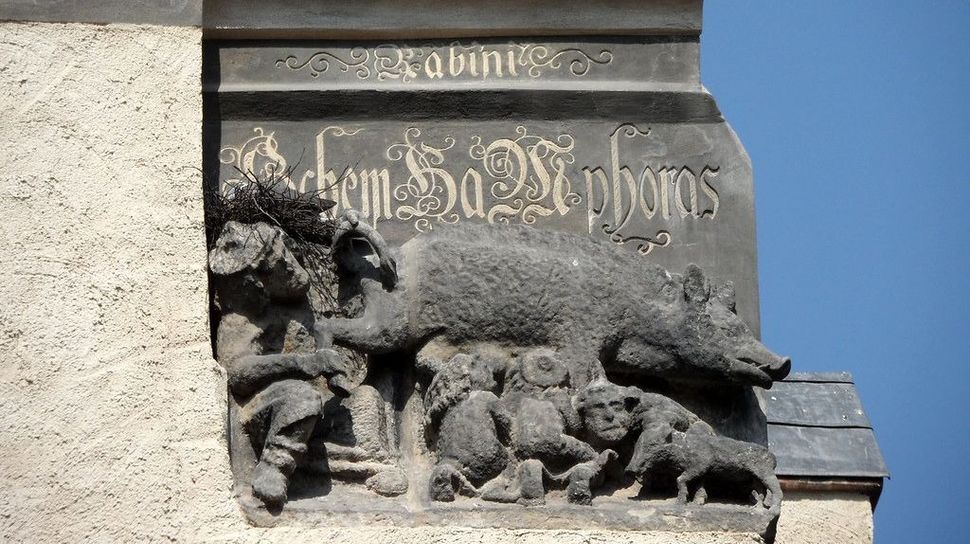 The judensau — “Jewish pig,” in German — relief on the outside of a Wittenburg church where Martin Luther preached. There are many such images on churches throughout Germany. Image by flickr

You may never have come into contact with a Jewish pig. But the Germans have.

Around 30 churches in Europe — mostly in Germany — have stone carvings on their facades that depict the medieval folk-art image of the judensau: the “Jewish pig,” an anti-Semitic image that features Jews touching and suckling a large pig.

Now, a church in Wittenburg where Martin Luther, the leader of the Protestant Reformation, preached — and a designated world heritage site — is debating whether or not to remove a 13th century judensau relief from its exterior, The Art Newspaper reported. This particular sandstone carving depicts Jews suckling the teats of a massive sow, as a rabbi inspects the sow’s rear end. Words carved above the image after the Protestant Reformation suggest that the rabbi is trying to read the Talmud, according to The Art Newspaper.

Church leaders appear amenable to removing the carving, which was initially requested by a lone German Jewish person.

“The proposal to take down the medieval sculpture and integrate it into a new monument seems convincing to me,” said Irmgard Schwaetzer, a German politician and the head of the leadership council of the Evangelical Church in Germany. “It expresses pure hatred of Jews. A centre of education that finds acceptance beyond the parish should be established here. This also means considering the feelings that this place awakens in our Jewish brothers and sisters.”

This is the first time the church has considered removing the relief. An online petition from several years ago advocating for it to be set aside as a separate monument, signed by 10,000 people, went nowhere. A legal complaint filed against the church by a Jewish man was thrown out in May.

The debate over whether to remove the relief has roiled some historians.

“We can’t allow this to lead to a kind of iconoclasm,” Insa-Christiane Hennen, an art historian and the author of a book on the Wittenberg church, said on a German radio program. “The problem of modern-day anti-Semitism cannot be solved by removing these medieval objects.”

The debate over the judensau comes amid rising concern over anti-Semitism across Germany. Recently, Germany’s commissioner on anti-Semitism said that it is dangerous to wear a kippah publicly in Germany. Last year, hate crimes against Jews were up 20% in Germany, with 90% of them being committed by people linked to far-right groups, according to numbers released by the German government.

Should A Historic German Church Remove An Anti-Semitic ‘Jewish Pig’ Carving From Its Facade?