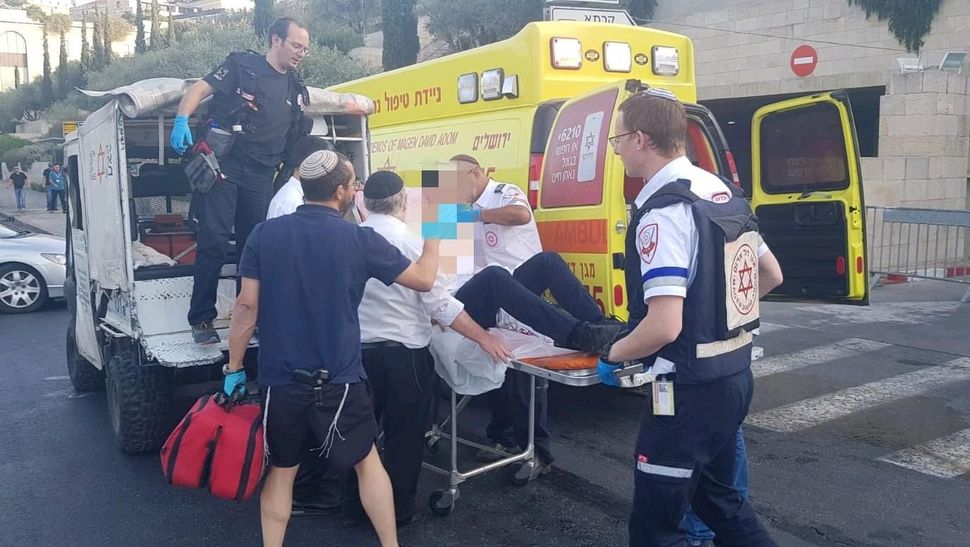 Medics treat a victim of a stabbing attack in Jerusalem’s Old City on May 31, 2019. Image by Magen David Adom

(JTA) — A 50-year-old man was seriously injured along with a 16-year-old student who was moderately wounded in a Jerusalem stabbing attack that ended with the slaying of the Palestinian perpetrator.

The incident, which occurred Friday morning in the Old City of Jerusalem, was filmed in its entirety in security cameras. The footage shows 19-year-old Yusuf Ahmed from the village of Abuwin stabbing Gavriel Lavi, 50, and then running with a large blood-covered knife and slamming into 16-year-old Yisrael Meir Nahumberg and knocking the victim off his bicycle while stabbing the adolescent in the back.

Ahmed is seen running from the scene, when he is shot by a border police officer while holding the bloody knife.

Nahumberg to the KAN broadcaster that police who saw him walking in their direction to get help told him to move out of the way while they were chasing the terrorist. He walked another 500 yards with a bleeding gash in his back to a police station, where he was taken to hospital.

The condition of both victims is stable.