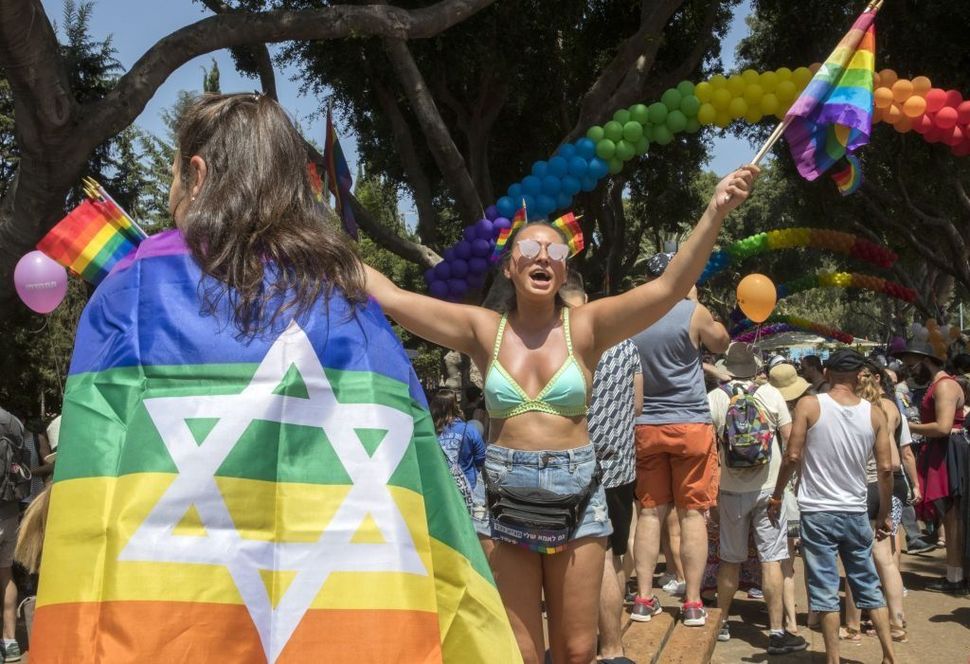 Participants take part in the annual Gay Pride parade in the Israeli city of Tel Aviv, on June 9, 2017. Image by JACK GUEZ/AFP/Getty Images

Jewish feminist and LGBTQ groups plan to join the D.C. Dyke March in Washington on Friday, with many members expected to bring “Jewish Pride” flags — featuring a Star of David prominently in the middle — despite the march’s ban on images that are reminiscent of the Israeli flag.

The march, a more radical alternative to Sunday’s Capital Pride event, has banned “nationalist symbols” like the flags of Israel and the United States. One of the march organizers, Rae Gaines, told the Forward on Thursday that the Jewish Pride flag would create an “unsafe space” for Palestinian-American marchers due to its resemblance to the Israeli flag. She stressed that other symbols of Judaism, including Stars of David that don’t look formatted like the Israeli flag, would be welcomed and embraced.

That rationale was not bought by the Jewish feminist group Zioness (which also has LGBTQ leaders and members), the Israeli-American LGBTQ organization A Wider Bridge and the Jewish Democratic Council of America, which are all meeting up and heading to the Dyke March together.

“Our point is to have a seat at the table,” A Wider Bridge communications director Ronit Bezalel told the Forward. “We believe in the principles of the Dyke March, and [that’s why] we’re going to be bringing Israeli symbols, the Jewish Pride flag. Our message is, no one should be policing this. We want to bring our full selves to the table.”

According to the Dyke March website, “Anyone who identifies as a Dyke is welcome to march. This includes all who experience gendered oppression—including but not limited to: trans and cisgender women, genderqueer, gender non-conforming, non-binary individuals, as well as bisexual and queer women.” Zioness’s Facebook event page welcomes “Dykes and allies” to the march, but the Dyke March website does not include straight allies in its list of those who are welcome; rather, it asks allies to hand out water bottles or cheer on the sidewalk.

“Allies will be marching, including me, because we were asked to do so by our queer Jewish sisters,” Zioness vice president Carly Pildis tweeted after this article was published (the group’s founder and president did not respond to requests for comment by publication time). “Our goal is to support them. I am honored to stand besides them as a Zioness board member and ally.”

The Dyke March did not respond to an emailed question about their plans should conflict emerge between the Zioness contingent and anti-Israel marchers, though The Washington Post noted that volunteer leaders had practiced deescalation exercises in anticipation of possible issues.

The Dyke March’s stance was also opposed by Bet Mishpachah, the local LGBTQ synagogue, which urged the Dyke March to reverse their decision and allow Jewish Pride flags. “For an organization [like the Dyke March] that has gone out of its way to include so many marginalized voices, those of us who identify with the Jewish community feel excluded,” said Patti Nelson, the secretary of the synagogue’s board of directors. Bet Mishpachah is neither encouraging or discouraging members to attend the march.

But two local Jewish groups that had signed on as “community partners” to the march have stuck with it. One was the left-wing advocacy group IfNotNow, whose members, including Gaines, helped organize the march and wrote an op-ed defending it in the Washington Blade, the local LGBTQ newspaper. “When we hear allegations that the Dyke March is anti-Semitic for taking a pro-Palestine stance, we feel betrayed by the Jewish community,” they wrote. “We choose to prioritize Palestinian lives and justice in Palestine over lazy symbols.”

The other Jewish community partner is a local minyan called the New Synagogue Project. The synagogue did not respond to repeated emails and Facebook messages requesting an interview (receipts show that they did see the messages), but they did post a statement on Friday saying they were “excited to show up tomorrow [sic] as proud and visible Jews.”

Both A Wider Bridge and Zioness have been criticized by some progressives because of their support for Israel. A Wider Bridge’s Shabbat service was shut down by protesters at a 2017 LGBTQ conference. Zioness, which has grown in popularity among Zionist feminist Jews since its founding in 2017, has periodically been criticized by other Jewish advocacy organizations for promoting themselves and their signs at protests unrelated to Israeli issues.