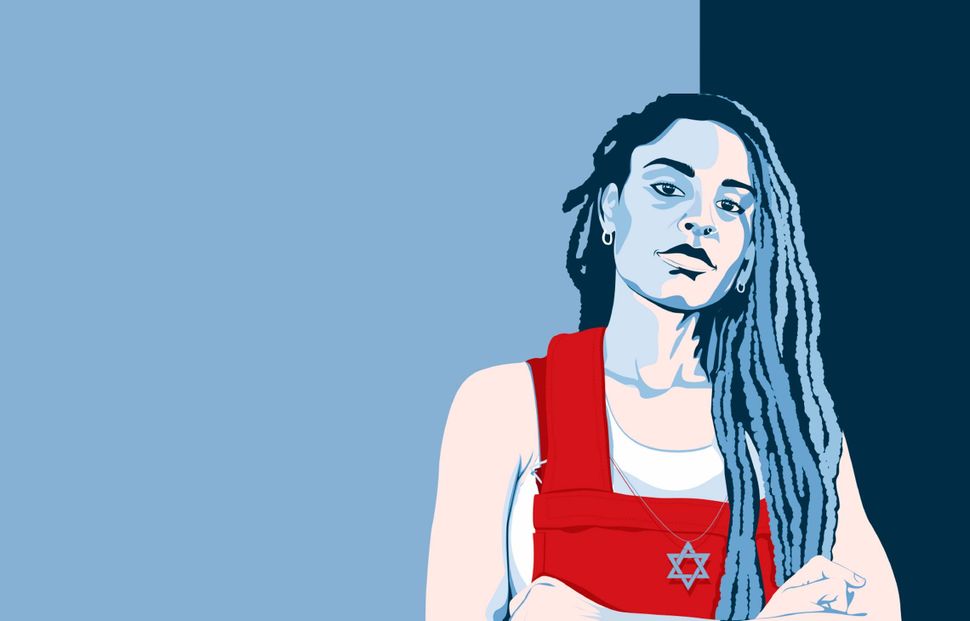 Members of the nascent Jewish organization arrived at the racial justice rally with posters and T-shirts bearing the group’s name and logo, tailed by a friend with a video camera and a security guard.

They were not a welcome sight to the longtime social justice leaders in the crowd — especially the Jewish ones.

Calling themselves the “Zioness Movement,” the all-women group of protesters has shown up at a handful of marches in recent weeks, outfitted with matching T-shirts and signs identifying themselves as Zionists.

Yet at that racial justice march on October 1 in Brooklyn, Jewish social justice activists said that the Zioness contingent seemed to have a different agenda.

“It was very clear to me that they were looking for a provocation,” said Rabbi Jill Jacobs, executive director of the rabbinic human rights group T’ruah, who has been a leading Jewish activist for over a decade. “It’s as if they were out to prove that, actually, the progressive community can’t accept them, or can’t accept Jews.”

The conflict over the Zioness “movement” comes as the Trump era sends people with little background in social justice activism out onto the streets. For Jews who see themselves as leftists but have hawkish views on Israel, encountering broader progressive movements for the first time leads to cognitive dissonance — and to tensions with longtime activists.

The rally was one of a nationwide set of marches that day, held in solidarity with a rally in Washington, D.C. held the day before. Inspired by the June acquittal of the Minnesota police officer who shot Philando Castile, the march was meant to highlight a discrete set of racial justice issues in New York, including criticism of the Rikers Island jail complex and “Broken Windows” policing policies. Jacobs said the Zioness group seemed to have their own agenda.

“It’s 100% appropriate and fantastic for Jews to show up with signs that have biblical citations” or other Jewish images, said Jacobs. “But signs that say ‘Zioness’ in big letters is inserting an international issue… into a rally that is not about that, and specifically that is inserting a wedge issue where there is not blanket agreement.”

Zioness appeared seemingly out of nowhere in mid-August, formed amid a controversy over a proposed ban on Zionist symbols at a Chicago march called the SlutWalk. Berman said that the idea for the group came up among a group of her friends.

“We’ve just been talking about how challenging it is to stand up in progressive spaces as Zionist Jews,” she said. “We care deeply about the Jewish state and its right to exist, and feel deeply about progressive social Justice causes in the United States, and [it] feels problematic that we have been so alienated from them because of our belief that the Jewish state has a right to exist.”

Asked about her background in progressive social justice activism, Berman volunteered that she has been on the youth leadership board of Friends of the Israel Defense Forces, which raises money to support Israeli soldiers, and active with UJA-Federation and the Women’s International Zionist Organization. She acknowledged she had not been active with any progressive advocacy groups. “I don’t know that I have that kind of experience,” she said.

She does, however, have experience in the pro-Israel community. Berman works as an attorney at The Lawfare Project, a pro-Israel legal advocacy group with close ties to the Conference of Presidents of Major American Jewish Organizations. Lawfare’s executive director, Brooke Goldstein, is a conservative firebrand and a regular guest on Fox News who is broadly critical of the use of the term “Islamaphobia,” and who argues that Palestinians do not exist as a national identity.

Berman says that there is no connection between Lawfare and the Zioness Movement, and that while Goldstein has attended Zioness events, she is not a founder or spokesperson for Zioness. Yet Goldstein did travel with Berman from New York to Chicago to march with the then-brand-new Zioness group at the SlutWalk in August, telling the Forward at the time that the group’s name was meant to be provocative.

“I’m super grateful for her support,” Berman said of Goldstein. “She has been by my side as I’ve launched this thing.”

Berman told the Forward that initial funding for Zioness has come friends and family members, and from T-shirt sales. She would provide no other names of Zioness leaders or members, citing social media attacks on the group. A spokesman for Lawfare said that Goldstein would not talk about Zioness. Chloe Valdary, a conservative pro-Israel writer and activist who has marched with the group, did not respond to an interview request.

Berman, for her part, would not enter into specifics about her Israel politics or the Israel politics of the group. Asked whether she supports the settlement project, Berman said: “What does that even mean?… You know that’s not a yes or no question.”

Zioness appeared to go dormant after its first actions in mid-August, but reappeared at an October 1 march that had been the subject of tension over Jews’ role in social justice movements even before its start.

The march was organized following an outcry over organizers scheduling a March for Racial Justice in Washington, D.C. on the day of Yom Kippur, when many Jews would be unable to participate. March organizers apologized and pledged to set up events the following day, including the one in Brooklyn, to include Jews.

A range of Jewish groups participated in the event, including Jews for Racial and Economic Justice, Orthodox activists, and the far-left Jewish Voice for Peace. JFREJ executive director Audrey Sasson said that her organization was concerned when she learned that the Zioness group would be there with their signs and shirts. The Zioness group, she worried, might distract from the issues the march organizers wanted to highlight.

“If it’s coming from a place where it’s about us as a Jewish community, where it’s about us and not about the issue and the people most directly impacted by the system, then we’re going to lose people, and we’re not going build the trust we need to build across movements and across communities,” Sasson said.

Berman said that the videographer that accompanied her group was a friend, and that they simply wanted to have video. She said that he brought a security guard because of threats she had received on social media. In photos from the march, Zioness members carry large placards, some bearing their logo and some bearing the phrase: “Zionists 4 Racial Justice.” They also wore t-shirts with their logo. A public relations firm sent out a press release on behalf of Zioness in advance of the march saying that they intended to participate.

Jacobs said that Zioness’ approach seemed designed to alienate. “For people who are coming who don’t identify with Zionism or who perhaps were Palestinian, they may not feel comfortable with those signs,” she said. “For those of us who consider ourselves Zionist, ourselves included, and who don’t agree with the pro-occupation vision the Lawfare Project is pushing, it makes us — in many ways it cheapens the Jewish presence.”

Berman, for her part, said that her Zioness group was not responsible for bringing the Israel-Palestine debate into the march. She said that their shirts and posters were simply expressions of identity. She cited speakers, including prominent Palestinian-American activist Linda Sarsour, for attacking her group.

“There was nothing that anyone holding a Zioness sign did that disrupted or in any way distracted from what this march was about,” she said. “It’s pretty hypocritical to say we’re the ones who did anything to damage the conversation the march is about.”

According to a report in Haaretz, Sarsour, who was an organizer of the massive Women’s March earlier this year, said that “there are instances of things that happened to me at this space [in the march] that made me feel unsafe,” apparently referring to the Zioness signs.