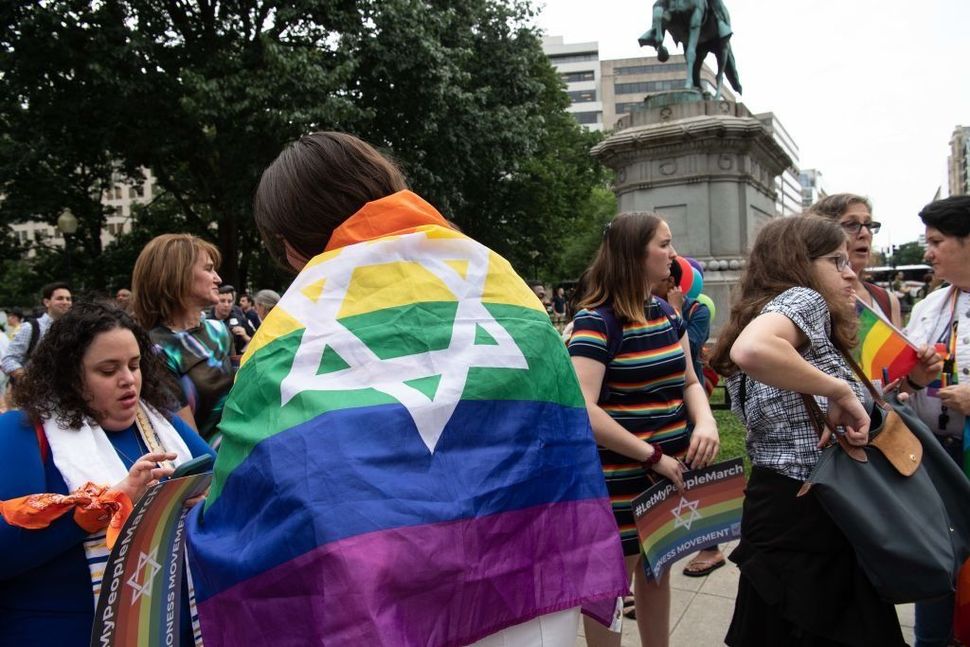 (JTA) — A handful of protesters demonstrated at the DC Dyke March over a ban on the Jewish Pride flag, a rainbow stripped flag with a white Star of David in the middle.

The flag looks too much like the flag of Israel, organizers had said before the march, which banned the flags of countries with “specific oppressive tendencies.” The flags of Israel and the United States were the only two mentioned specifically in the ban. There was no such ban on Palestinian flags.

Some would-be marchers carrying the Jewish Pride flag were turned away by marshals at an entrance point to the march. A marshal said they could enter if they removed the Star of David from the flag. Jewish stars reportedly were welcome in any other context.

Despite what the AFP news agency called a “handful of protesters,” the D.C. Dyke March was “otherwise calm.”

It took place a day before the city’s annual pride parade and was supposed to focus on combating gentrification and displacement.

The DC Dyke March Facebook page was full of comments criticizing the decision to ban the Jewish Pride Flag, accusing the organizers of placing “an unwarranted burden of proof (on) Jewish dykes that they don’t approve of the actions of another country (in) which they do not vote,” and “discriminat(ing) against gay Jews while marching against discrimination.”

“In order for pride flags not to be about Israel, all you have to do is remove the (Jewish) Star” – @IfNotNowOrg Jewish collaborator guard at the entrance to the @dcdykemarch separating good Jews from bad Jews