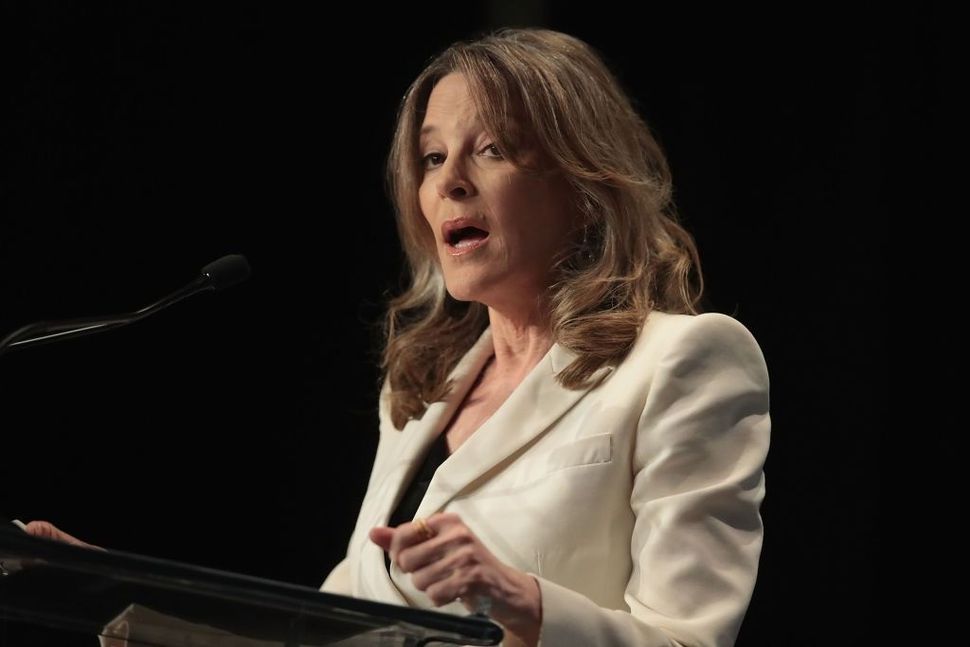 Williamson, an author and motivational speaker, made her comments the same day that Rep. Alexandria Ocasio-Cortez attracted criticism for comparing migrant detention facilities on the Mexican border to concentration camps.

“Ladies and gentlemen, I’m a Jew,” Williamson said in her talk at Southern New Hampshire University. “And we are raised to say ‘never again.’ It’s happening again. There are some people who would say to me, ‘Now Ms. Williamson, I think this Jewish analogy, you’ve really gone too far there. This is not the same situation at all.’ But ladies and gentlemen, some of those people will be deported to places so dangerous that it actually is no different.”

Williamson reiterated her comments in a follow-up interview with Vice.

“I don’t know about you, but I have visited the Anne Frank House. I’ve been to those places where people hid Jews in the basement. When I think of the fear that some people are going through right now after the president made that announcement [of impending raids], you know, where are they going to go?”

“‘Never again’ is never supposed to mean ‘never again to us.’ It’s supposed to mean ‘never again, period,’” Williamson continued. “Some people would say ‘well, Marianne, that’s a false analogy because yes there might be mass arrests, yes there might be mass deportations, but they’re not being sent to the gas chambers.’ Yes, that is true. However, when we really allow ourselves to consider where they are going, to some of them they will be returned to almost certain violence and deep injustice.”

Williamson is one of two Jewish candidates running for the Democratic presidential nomination. The other, Vermont Sen. Bernie Sanders, refused to compare the detention facilities to concentration camps when asked about the Ocasio-Cortez controversy by CNN. “I didn’t use that terminology,” Sanders said, adding, “I have a lot of respect for Alexandria and I think she’s doing a fantastic job. What I will tell you is that we are locking up children and keeping them in deplorable conditions for weeks in places that are not meant for kids, and that is absolutely unacceptable.”