Sanders Breaks With AOC Over ‘Concentration Camps’ As Debate Rages On 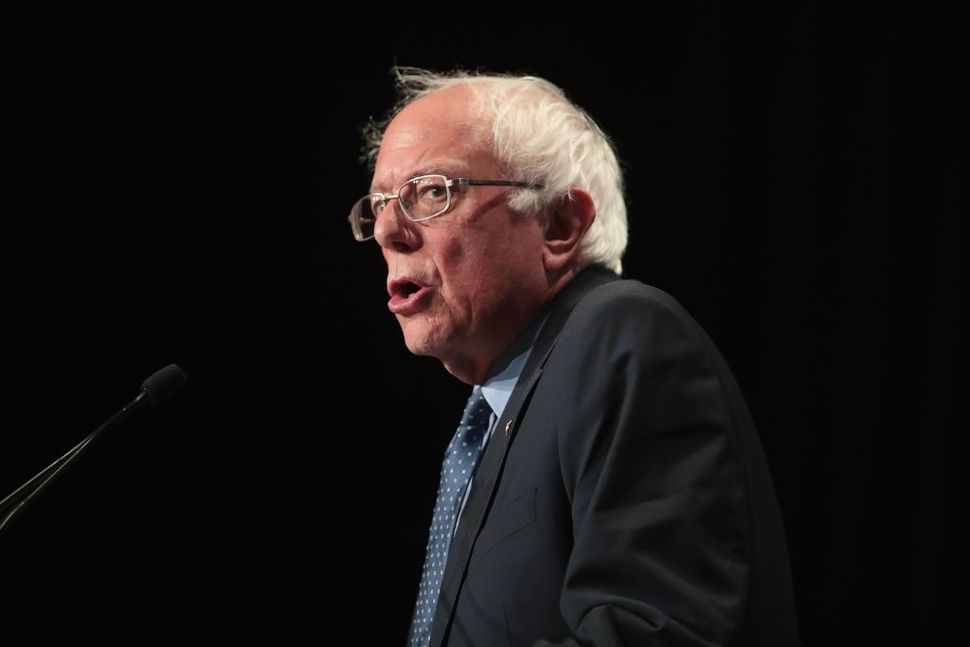 What is a concentration camp? Is describing detention camps for immigrants together with the phrase “Never again” acceptable? Do these references trivialize the mass slaughter that took place in the Nazi-era death camps?

The use of these words by Rep. Alexandria Ocasio-Cortez in reference to the “brutalizing” of illegal immigrants in detention centers on the southern border of the United State exploded into a firestorm of partisan finger-pointing and discussion among Jewish organizations, historians, and Holocaust scholars on Tuesday.

Jewish 2020 presidential hopeful Bernie Sanders, Ocasio-Cortez’s fellow progressive, distanced himself from her reference to concentration camps in a CNN interview Tuesday evening. “I didn’t use that terminology,” noted Sanders, subsequently repeating twice in the interview that he had “not used that word.”

At the same time, he said, “I have a lot of respect for Alexandria and I think she’s doing a fantastic job. What I will tell you is that we are locking up children and keeping them in deplorable conditions for weeks in places that are not meant for kids, and that is absolutely unacceptable.”

Holocaust historian Deborah Lipstadt told Haaretz that invoking the Holocaust was a “strategic mistake” for opponents of the Trump administration’s immigration policies.

“Instead of talking about the horrors of the policy, we are debating whether it’s akin to the Holocaust,” Lipstadt said in an email. Last year, Lipstadt wrote that while the White House policies were “indefensible and horrible in their own right,” she added that “they are not engaged in genocide” and “using historically invalid analogies gives those responsible for these outrages a chance to wriggle out from the avalanche of justified attacks on their policies.”

Controversy over whether or not Ocasio-Cortez was demeaning the Holocaust began Monday when the congresswoman — commonly seen as a heroine on the left and lightning rod on the right — posted an Instagram live video in which she claimed that “the U.S. is running concentration camps on our southern border, and that is exactly what they are.”

She continued: “If that doesn’t bother you … I want to talk to the people that are concerned enough with humanity to say that ‘Never again’ means something.”

The debate over the treatment of migrants intensified in recent days after President Donald Trump tweeted news of forthcoming “mass arrests” of migrants by authorities across major U.S. cities.

Ocasio-Cortez’s video was picked up and circulated on social media by conservative media outlets.

After initial criticism of her word choice, Ocasio-Cortez doubled down in a tweet on Tuesday. She asserted that it was the “conclusion of expert analysis,” linking to an article by Andrea Pitzer that claims the dictionary definition of concentration camp — a site for “mass detention of civilians without trial” — was applicable to the situation at the U.S. border.

And for the shrieking Republicans who don’t know the difference: concentration camps are not the same as death camps.

Concentration camps are considered by experts as “the mass detention of civilians without trial.”

And that’s exactly what this administration is doing.

The first and harshest condemnations of Ocasio-Cortez came from the Republican Jewish Coalition, which said in a statement that it was “disgraceful for Rep. Alexandria Ocasio-Cortez to compare our nation’s immigration policies to the horrors carried out by the Nazis.”

That was followed by an angry tweet from Rep. Liz Cheney, the Wyoming Republican who said that Ocasio-Cortez’s comments “demean” the memory of Holocaust victims.

Please @AOC do us all a favor and spend just a few minutes learning some actual history. 6 million Jews were exterminated in the Holocaust. You demean their memory and disgrace yourself with comments like this. https://t.co/NX5KPPb2Hl

And so the debate began, with the Republican right attacking Ocasio-Cortez for her insensitivity and the Democratic left — including many members of the Jewish community — strongly defending the congresswoman’s use of the term.

Several took Ocasio-Cortez’s lead and pointed to the dictionary definition of “concentration camp,” noting that it left room for associations that are unrelated to the Holocaust.

According to Merriam-Webster, a concentration camp is defined as “a place where large numbers of people (such as prisoners of war, political prisoners, refugees, or the members of an ethnic or religious minority) are detained or confined under armed guard — used especially in reference to camps created by the Nazis in World War II for the internment and persecution of Jews and other prisoners.”

“Especially” — but not exclusively.

Still, many left-wing commentators, including MSNBC’s Chris Hayes — who accepted the distinction between Nazi death camps and concentration camps, which have a history that both predates and extends far past the Nazis — agreed that the term was probably best avoided.

Anti-Defamation League CEO Jonathan Greenblatt referred to the group’s middle ground position that urged “caution when drawing comparisons to the Holocaust,” while at the same time stressing the ADL’s “opposition to the horrible conditions separating families at the border.”

Almost exactly one year ago, we urged caution when drawing comparisons to the Holocaust and reiterated our opposition to the horrible conditions separating families at the border. This resonates just as strongly today. https://t.co/ru1RWjuKgr https://t.co/2uhlvRuOaW

Some of those who sit farther left on the political spectrum attacked Greenblatt’s position. Women’s March spokeswoman Sophie Ellman-Golan tweeted that Greenblatt was giving “liberal cover” to the far right. That he would “issue this statement in the face of multiple reports of the conditions in these camps and the indisputable evidence that they exist to target a specific racial group, is unbelievably shameful,” she added.

The fact that you would issue this statement in the face of multiple reports of the conditions in these camps and the indisputable evidence that they exist to target a specific racial group, is unbelievably shameful.

“We urge you to refrain from using terminology evocative of the Holocaust to voice concerns about contemporary political issues,” the group wrote. The terms “concentration camp” and “Never Again,” they asserted, “are synonymous with and evocative of the atrocities committed by Adolf Hitler’s Nazi Germany.”

Though the group said they were “concerned” with the conditions at the migrant camps, “the regrettable use of Holocaust terminology to describe these contemporary concerns diminishes the evil intent of the Nazis to eradicate the Jewish people.”

We urge @AOC to refrain from using terminology evocative of the Holocaust tonvoice concerns about contemporary political issues, as per our letter below. pic.twitter.com/276hH8jRWn

The group offered to work with Ocasio-Cortez to arrange visits to a Holocaust-era concentration camp, Holocaust museum or meetings with camp survivors so she could form a “better understanding of the horrors of the Holocaust.”

Sanders Breaks With AOC Over ‘Concentration Camps’ As Debate Rages On