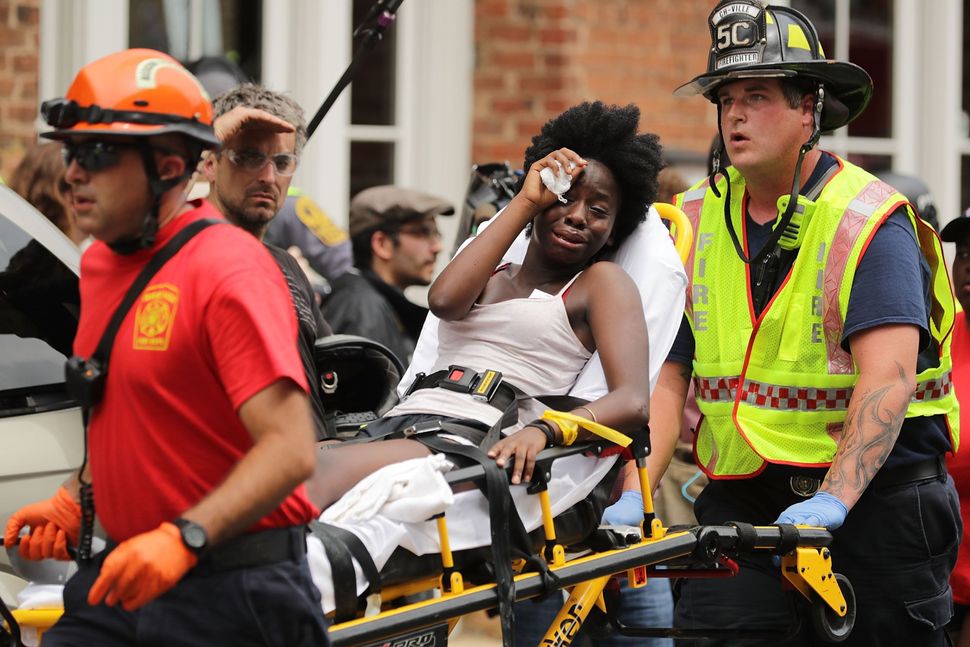 A woman being taken to a hospital by paramedics after Alex Fields, Jr, plowed his car into a group of counter-protesters at the Charlottesville “Unite the Right” rally. Image by Getty

The white supremacist who murdered a woman when he plowed his car into a group of counter-protesters at the Charlottesville “Unite the Right” rally is asking the judge in his case for mercy, the AP reported.

Alex Fields, Jr, who once kept a picture of Adolf Hitler by his beside, has entered the sentencing phase of his trial for the first-degree murder of Heather Heyer, for which the maximum penalty in this case is life imprisonment. He is awaiting sentencing for other charges related to his car-ramming, which injured dozens of other people.

“No amount of punishment imposed on James can repair the damage he caused to dozens of innocent people. But this Court should find that retribution has limits,” Fields’ lawyers wrote. They added that a more lenient sentence would be a “conviction that no individual is wholly defined by their worst moments.”

Prosecutors in the case have pushed back on the suggestion that Fields is anything less than an unrepentant white supremacist and anti-Semite, reporting that he has made disparaging comments about Heyer’s mother in calls from a jail pay phone. They have also said that Fields’ history of mental health issues should not prevent him from receiving the maximum sentence.

“Any mental health concerns raised by the defendant do not overcome the defendant’s demonstrated lack of remorse and his prior history of substantial racial animus,” they wrote in a memo earlier this month.

Fields is scheduled to be sentenced on June 28.