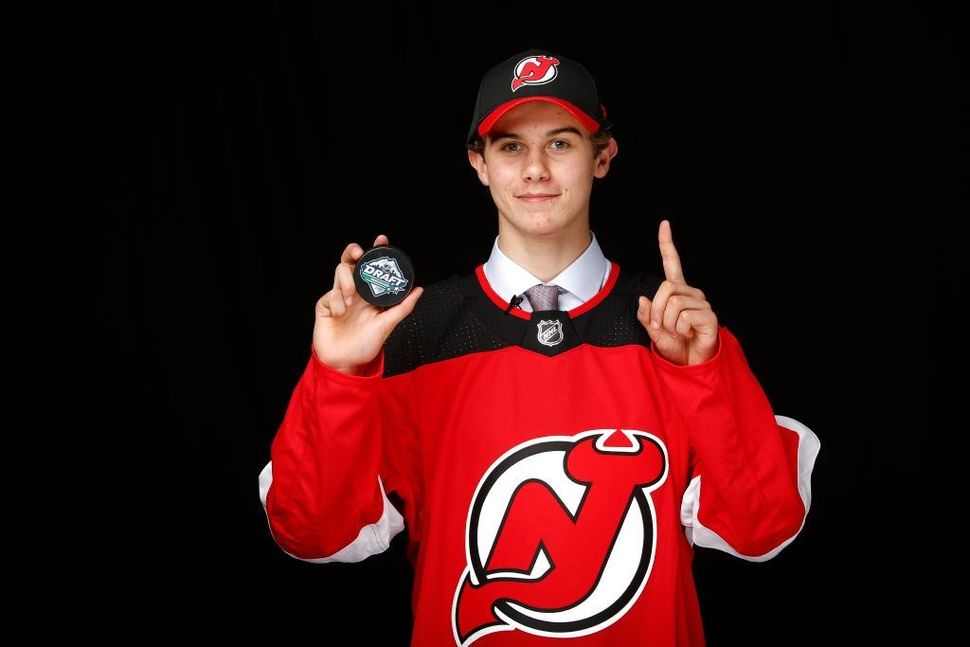 Jack Hughes poses for a portrait after being selected first overall by the New Jersey Devils during the first round of the 2019 NHL Draft at Rogers Arena on June 21, 2019 in Vancouver, Canada. Image by Kevin Light/Getty Images

(JTA) — Jack Hughes, even at 18, is no stranger to making history. And now he’s done it again, becoming the first Jewish player to be drafted No. 1 overall by the National Hockey League.

The New Jersey Devils picked Hughes, a Florida native who grew up in Ontario, Canada, on Friday. He’s the son of a Jewish mother and Catholic father, both big-time hockey players back in the day, who attended Catholic high school but had a bar mitzvah.

“We did Passover when we were younger,” the teen phenom told “The Michael Kay Show” on ESPN Radio on Monday.

His older brother, Quinn, was the No. 7 pick a year ago by the Vancouver Canucks. Both were members of the U.S. squad in the Men’s World Championship last month in Slovakia. They have a 15-year-old brother, Luke, who appears to be following in their footsteps.

Being chosen No. 1 overall “obviously is special … really exciting,” he told Kay and his sidekicks.

Does this mean at Christmas you get to brag? they asked Hughes, a 5-10, 170-pound forward.

“Not just Christmas but the other 364 days, too,” he responded, noting the siblings’ competitiveness. His brother is a defenseman.

For Hughes and his brothers, the hockey lineage comes from their parents. Mom Ellen Weinberg-Hughes was a member of the U.S. women’s squad that took silver in the 1992 World Championships, while dad Jim played for Providence College before becoming a coach and working in player development with the NHL’s Boston Bruins and Toronto Maple Leafs.

“It’s in my blood to be an athlete, to be a hockey player,” Hughes said on the Kay show. “My parents are having a ball with it.”

The Devils expect quite a bit from their top choice.

“I think he’s going to change our organization,” an executive and a former star goalie with the club said, according to the Breaking Israel News website. “He’s a tremendous talent.”

Upon confirming Hughes’ Jewishness, one of Kay’s sidekicks, Peter Rosenberg, was on board as a fan, forsaking his former favorite, Pittsburgh Penguins’ great Sidney Crosby.