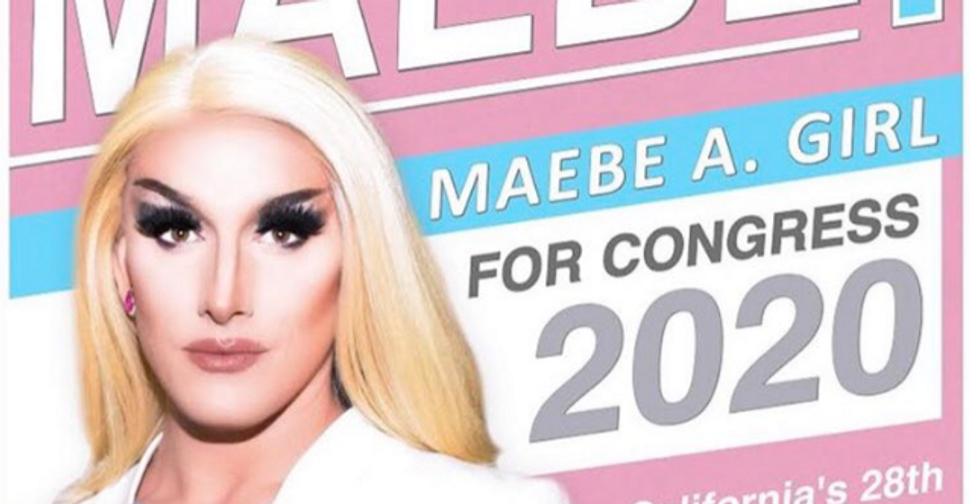 The campaign poster for drag queen Maebe A. Girl, who is running for Congress against Adam Schiff. Image by Maebe A. Girl/Twitter

It’s still 16 months until the 2020 elections, but House Intelligence Committee chairman Adam Schiff already has an opponent, and it’s someone who has already made history: Maebe A. Girl, the first drag queen ever elected to public office.

In April, Girl was voted onto the neighborhood council in the Silver Lake area of Los Angeles. Now Girl, who identifies as genderfluid and trans and uses female pronouns, has set her sights on Washington.

“I want to run against Adam Schiff because I believe the people in (California’s 28th District) deserve a representative that can relate to their struggles and who knows what it’s like to experience systemic oppression,” Girl told the LGBT news site Q Voice News on Sunday. “Too many of our representatives are wealthy, middle-aged white men, and that doesn’t accurately represent our diverse population.”

Schiff, who is Jewish, has served in Congress since 2001.

Girl, who is running on a platform of protecting the rights of minorities, immigrants and the environment, said her quest to serve on the neighborhood council pushed her to seek higher office.

“I’ve been inspired by all the people I’ve spoken to who want to see real change and actual representation in government,” she said. “I want to do as much as possible for both my local community and the nation at large.”

In addition to her work on the Silver Lake Neighborhood Council, Girl is also a performer known for her impersonations of political figures like Melania Trump, Betsy DeVos and Sarah Huckabee Sanders, Los Angeles Magazine reported.

California’s congressional primary is March 3, 2020. The top two vote-getters regardless of party will proceed to the November general election.