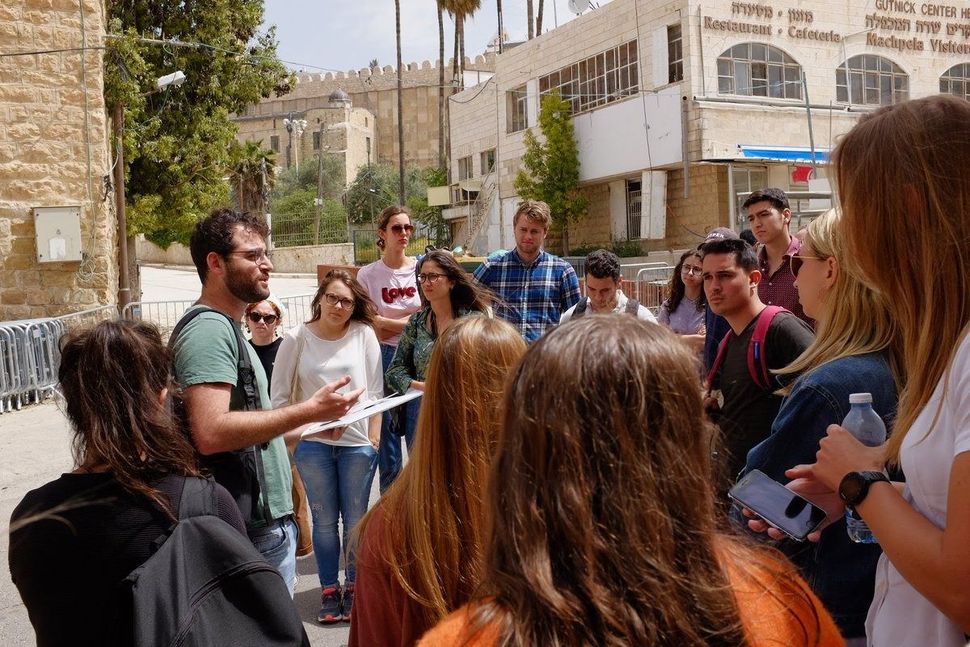 Forty participants are set to take part in the 10-day inaugural trip, titled “Let Our People Know,” which is sponsored and financed by J Street.

The tour includes visits to the West Bank cities of Hebron and Ramallah, as well as meetings with Jewish settlers from the Binyamin Regional Council.

J Street, a movement that describes itself as being “pro-Israel” and “pro-peace,” contends that Birthright — a 20-year-old program that has brought more than 600,000 young Jewish adults from around the world on free 10-day trips to Israel — does not provide participants with a balanced view of the Israeli-Palestinian conflict as it ignores the Palestinian narrative. Except on rare occasions, Birthright participants do not visit the West Bank.

Like the Birthright tour, the J Street itinerary (shared with Haaretz) includes several days in Jerusalem, with scheduled visits to Yad Vashem (the Holocaust remembrance center) and the Old City. While in Jerusalem, however, the group will also spend time in the city’s eastern Arab section.

The itinerary also includes a stop in the northern Galilee region, where, in addition to visiting sites of Jewish interest, participants will tour the Arab city of Sakhnin.

That evening, back in their Jerusalem hotel, participants will engage in a group activity called “Processing the Day.” The following day, they will visit Ramallah’s high-tech park in the West Bank, meet with settlers, and have dinner with Israeli and Palestinian peace activists.

However, participants will also spend an entire morning at Neve Midbar — an Israeli beach located over the Green Line (the pre-1967 borders of Israel) on the northern section of the Dead Sea — for what the itinerary describes as a “swim and group lunch.”

The trip also includes a visit to the Gaza border communities with a briefing on the humanitarian situation in the Gaza Strip. Participants will spend their final day in Israel touring Tel Aviv-Jaffa.

J Street U has more than 50 chapters on college campuses across the United States and brings more than 1,000 students a year to Washington for its parent organization’s annual conference.

Whether or not there will be future J Street U trips to Israel depends on the organization’s success in raising the necessary funding.

Last fall, a petition organized by J Street U, signed by 1,500 Jewish students, demanded that Birthright’s itinerary include Palestinian speakers who could address the realities of the occupation. It was delivered to directors of Hillel — the largest Jewish student organization in the world and a major recruiter for Birthright — at more than 30 campuses across the United States.

When the organization did not receive what it considered an adequate response to its appeal, it decided to launch its own trips.