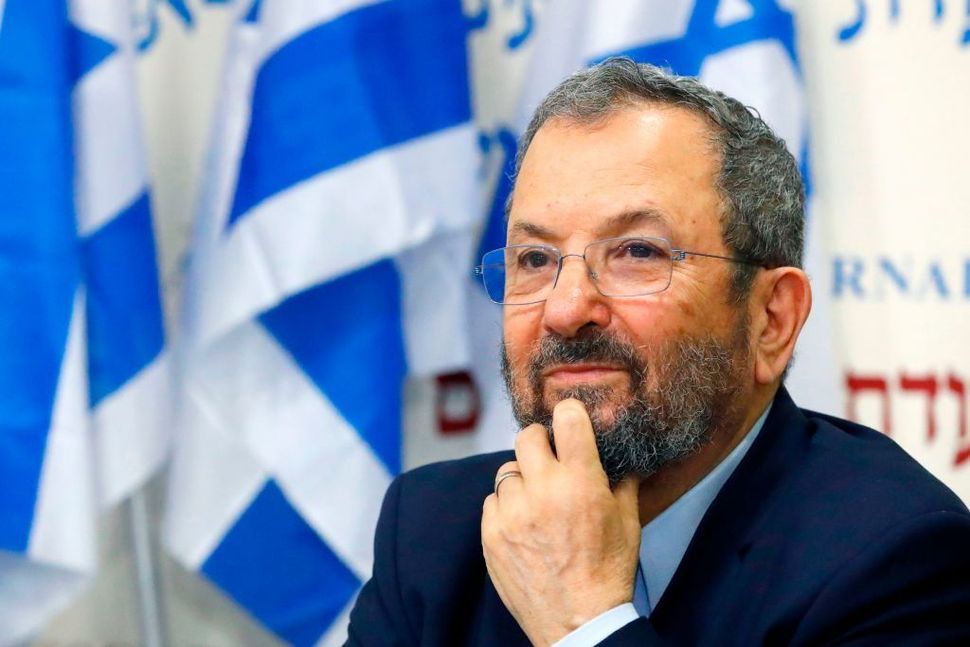 Former Israeli prime minister Ehud Barak looks on during a press conference at Beit Sokolov in Tel Aviv on June 26, 2019 to announce that he will be running in the upcoming elections in September. Image by JACK GUEZ/AFP/Getty Images

Barak, who left politics in 2013, recently re-entered the political fray, announcing a new party formed for the purpose of unseating Netanyahu.

On Sunday, Netanyahu tweeted a screenshot of a Hebrew-language report about Epstein’s arrest and his ties to Barak. The report said that Epstein had been a trustee of the Wexner Foundation when it gave Barak $1 million in 2004, but did not provide the reason.

Barak responded in a tweet: “It pains me to hear that people I know get in trouble and face criminal charges. First Netanyahu, now Epstein. I wish both of them that the truth will come out.”

Epstein was arrested Saturday in connection with allegations that he was involved in sex trafficking dozens of minors in New York and Florida between 2002 and 2005. He was indicted Monday in federal court in Manhattan.

Netanyahu is at the center of three pending corruption cases.

The prime minister  doubled down on Tuesday, posting a video under the heading “What else has sex offender Epstein given to Barak?”

The video charges that Barak received a payment of $2.3 million from the foundation and has not disclosed what the payment was for beyond saying in an interview that he provides “consulting and research services.” It claims Barak never conducted the research.

Netanyahu’s Likud party also has alleged that Barak attended a party hosted by Epstein in 2016.