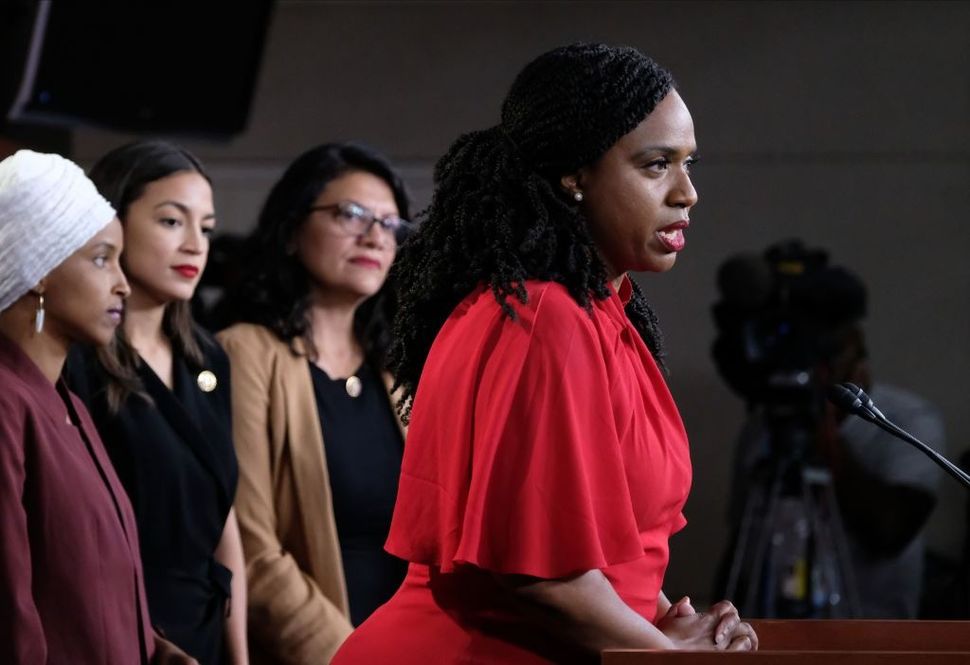 Freshman Democratic Rep. Ayanna Pressley of Massachusetts attracted more attention than ever this week after President Trump took thinly-veiled shots at her and other members of “The Squad,” the quartet of first-term progressive congresswoman of color who have taken the political world by storm.

In tweets on Sunday and Monday that were widely criticized as racist, Trump said that Democratic congresswoman should “go back and help fix the totally broken and crime infested places from which they came.”

All of the four are United States citizens; three of them were born in America.

The Cincinnati-born Pressley said in a press conference that Trump’s words were ”a disruptive distraction from the issues of care, concern and consequence to the American people” and urged people “not take the bait.”

Although still more prominent than the average freshman, Pressley has attracted less attention than her more controversial Squad-mates — Alexandria Ocasio Cortez, Ilhan Omar and Rashida Tlaib. Here’s what you need to know about her:

She’s young, but an experienced politician:

Pressley, 45, has more electoral experience than the rest of the Squad combined. A former aide to Massachusetts senator John Kerry, she was elected to the Boston City Council in 2009 and served until being sworn into Congress this year. She was the first woman of color ever to serve on the council.

She primaried her congressional opponent — but not on ideological grounds:

Pressley’s race against 20-year incumbent Rep. Michael Capuano was notable for how much they agreed on the issues, according to local media reports. Pressley based her campaign largely on the fact that as a younger person and a black woman, she was better-placed to represent an increasingly-diverse district. ““We will vote the same way, but I will lead differently,” she said in a debate.

Voters were receptive to that argument – she won her primary 59%-41% in September 2018, ensuring her general election victory two months later (when Republicans didn’t even field a candidate).

Since her election, Pressley has been a vocal progressive presence in the House, saying that she supports the impeachment of President Trump and calling for the defunding of Immigration and Customs Enforcement.

She has a good relationship with the local Jewish community:

Ocasio-Cortez, Tlaib and Omar have faced backlash from the Jewish community due to their criticisms of Israel, particularly the latter two’s support for the boycott, divestment and sanctions campaign against Israel (Omar has also been accused of making Anti-Semitic statements, for which she apologized).

But Pressley is not a supporter of BDS and has close ties with local Jewish leaders.

“The Jewish community in Boston has enjoyed a warm and productive relationship with congresswoman-elect Pressley during her nine years holding a Boston citywide elected position,” Jewish Community Relations Council of Greater Boston executive director Jeremy Burton said last year. “During that time and during this year’s campaign, Pressley has sought out the input and perspectives of our leaders and organizations on a range of issues, including the U.S.-Israel partnership.”

For example, Pressley appeared at a synagogue in Boston in January for a special Shabbat service to celebrate Rev. Martin Luther King, Jr. The appearance came a few days after Pressley received some flack for tweeting a quote by “The Color Purple” author Alice Walker, who has a long history of anti-Semitic statements (Pressley apologized, saying that she condemned anti-Semitism and didn’t know about Walker’s controversial language).

I fully condemn and denounce anti-Semitism, prejudice and bigotry in all their forms – and the hateful actions they embolden. I appreciate my friends, including my brothers and sisters in the Jewish community, who brought these statements to my attention. 2/2

Pressley does support a bill opposed by many pro-Israel organizations, which would prevent Israel from using American military for the “military detention, interrogation, or ill-treatment of Palestinian children.” But as JTA’s Ron Kampeas noted, dozens of other progressive Democrats support that bill too.

Aiden Pink is the deputy news editor of the Forward. Contact him at [email protected]