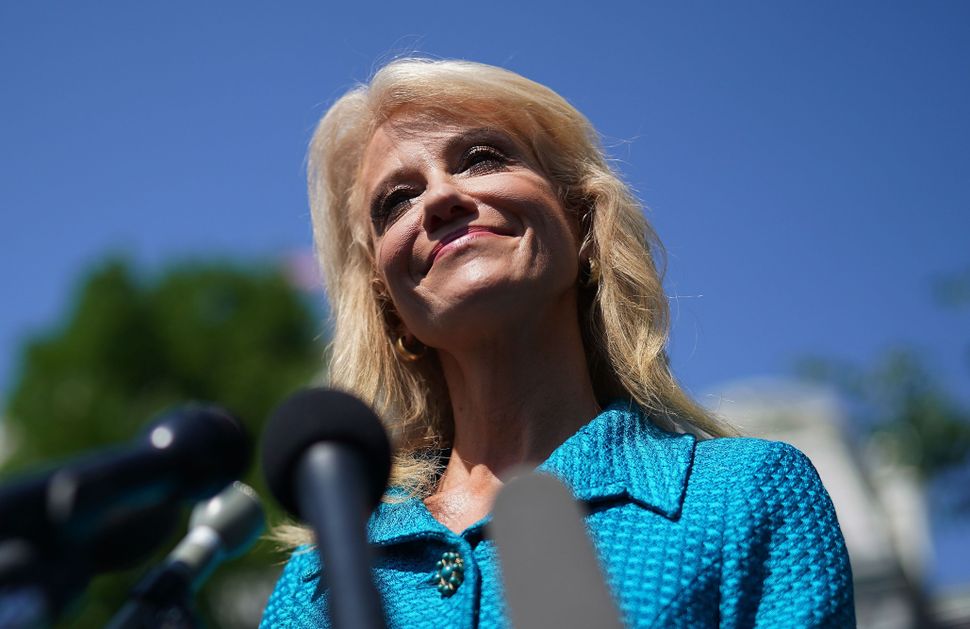 Kellyanne Conway, a senior advisor to Donald Trump, asked a Jewish reporter his ethnicity Tuesday after he asked her a question about the meaning of recent tweets from Donald Trump that were widely identified as racist.

The question came as Conway was defending Trump’s tweets, in which he suggested that four female Congresswoman of color — Alexandria Ocasio-Cortez, Rashida Tlaib, Ilhan Omar and Ayanna Pressley — should “go back” to the countries their families come from. The tweets were widely condemned, and many observers noted that they suggested that Trump believes that non-white people do not belong in the U.S.

During a session with reporters in D.C. Tuesday, Andrew Feinberg, a White House reporter for Breakfast Media, asked Conway to clarify an earlier answer she had given about the tweets, in which she denied that Trump was telling the four congresswoman targeted in the tweets to go back to their countries of origin.

“If the president was not telling these four congresswoman to return to their supposed countries of origin, to which countries was he referring?” Feinberg asked.

Feinberg asked her why that was relevant to his question.

“Because I’m asking you a question,” Conway said. “My ancestors are from Ireland and Italy.”

Conway then dodged Feinberg’s repeated questions about why she asked him about his ethnicity, and grew visibly testy as she spoke about how she was sick “of America coming last, to people who swore an oath of office.”

JUST NOW: I asked @KellyannePolls, who’d just said @realDonaldTrump was not telling Omar/Tlaib/Pressley/AOC to go back to Somalia/Gaza/Puerto Rico/etc, which countries he was referring to.

She responded by asking me where my ancestors came from, thereby confirming what he meant

Feinberg noted that Conway’s response to his question was an apparent admission that Trump had no other motive in his tweets than to suggest that the four Congresswoman should leave the U.S. and go to the countries their families emigrated from.

By asking about my ethnicity (a mix of ?? ?? ?? and ??, I’m told) in response to my question, @KellyannePolls inadvertently confirmed that @realDonaldTrump was telling @IlhanMN, @RashidaTlaib, @AOC, @AyannaPressley to return to Somalia, Gaza, Puerto Rico, and somewhere in Africa. https://t.co/0egLbFXILk

A video posted by Bloomberg contained audio of the full interaction.

Kellyanne Conway just asked reporter @AndrewFeinberg “what’s your ethnicity” after he asked about Trump’s attack on Democratic congresswomen to “go back” to where they came from pic.twitter.com/dEdzxtycUN

Conway’s remarks drew widespread condemnation on social media, and led to people calling her an anti-Semite. But Feinberg, in one tweet, said that he did not think that Conway was being anti-Semitic. Conway then responded to Feinberg’s tweet, insinuating that she could not be anti-Semitic because she criticized comments from Omar earlier this year.

I’m fact, in that same gaggle, I made clear my outrage at the anti-Semitic comments flowing so easily out of @IlhanMN and how absurd it was that the House could not condemn her by name in a resolution in March.

Conway has repeatedly denied facts in media appearances on behalf of the White House, including famously coining the phrase “alternative facts.” In 2017, she retweeted a White Supremacist account, then denied that she had any knowledge of the post. But while she was quick to respond to the growing outrage over her question, she did not address the fact that she asked Feinberg his ethnicity, and not where his ancestors were from.

“We are all from somewhere else ‘originally’,” she wrote in one tweet.

This was meant with no disrespect.

We are all from somewhere else “originally”. I asked the question to answer the question and volunteered my own ethnicity: Italian and Irish.

Like many, I am proud of my ethnicity, love the USA & grateful to God to be an American ?? https://t.co/OvBALIO6WP

Feinberg gained some amount of media fame two years ago, when he left his job as White House correspondent for the Russian state-controlled media organization Sputnik after the organization pushed false narratives, particularly about the killing of DNC staffer Seth Rich. Feinberg later gave his email correspondence to the FBI to aid their investigation into whether Sputnik should have had to register as a foreign propaganda agency.

Update, 7/16/19 — This article has been updated throughout with additional information.