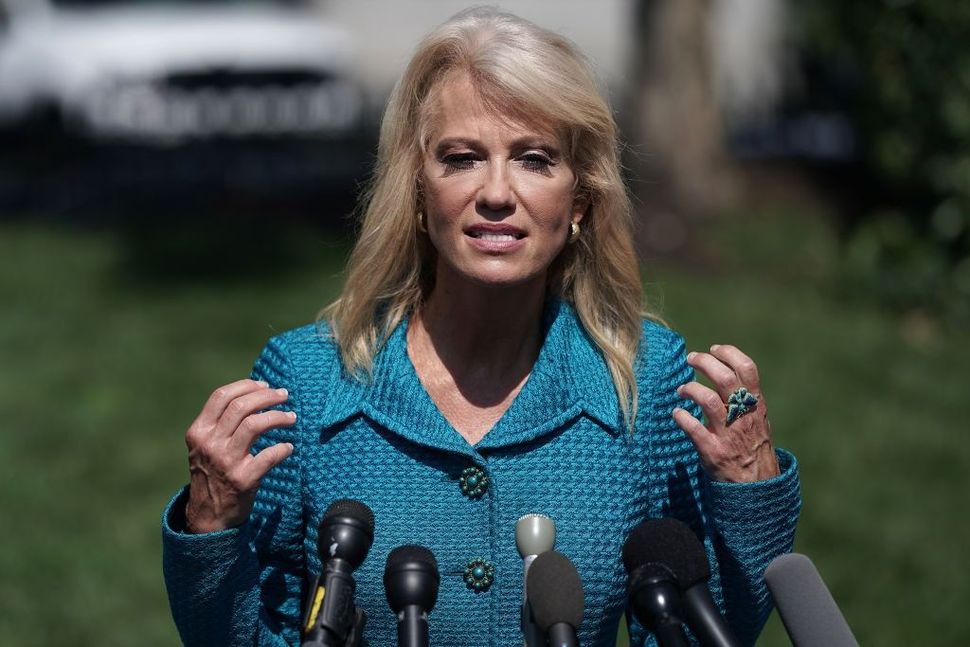 White House counselor Kellyanne Conway talks to reporters outside of the West Wing on July 16, 2019. Image by Chip Somodevilla/Getty Images

Reporter Andrew Feinberg said Tuesday night that his interaction with White House counselor Kellyanne Conway, in which she asked him about his ethnicity, was “bizarre.”

“It’s not the first time she’s asked me an irrelevant or inappropriate question in response to one of my questions,” Feinberg told CNN. “Around the Fourth of July, when I asked her why the RNC was handing out tickets to a supposedly non-political event, she asked if I knew why we celebrate the Fourth of July. And she’s done this before. It’s not unusual for her to do something like that. But, this time it was a little weirder than normal.”

Feinberg, a reporter for Breakfast Media, was among a number of reporters on White House grounds who tried to ask Conway whether President Trump’s tweets telling congresswoman of color to “go back” to their countries of origin was racist.

“If the president was not telling these four congresswoman to return to their supposed countries of origin, to which countries was he referring?” asked Feinberg, who is Jewish.

Feinberg asked why that was relevant, and Conway responded, “Because I’m asking you a question. My ancestors are from Ireland and Italy.”

Kellyanne Conway just asked reporter @AndrewFeinberg “what’s your ethnicity” after he asked about Trump’s attack on Democratic congresswomen to “go back” to where they came from pic.twitter.com/dEdzxtycUN

Feinberg tweeted after the interaction that he didn’t think Conway was being anti-Semitic. Conway subsequently claimed on Twitter that the interaction was “meant with no disrespect.”