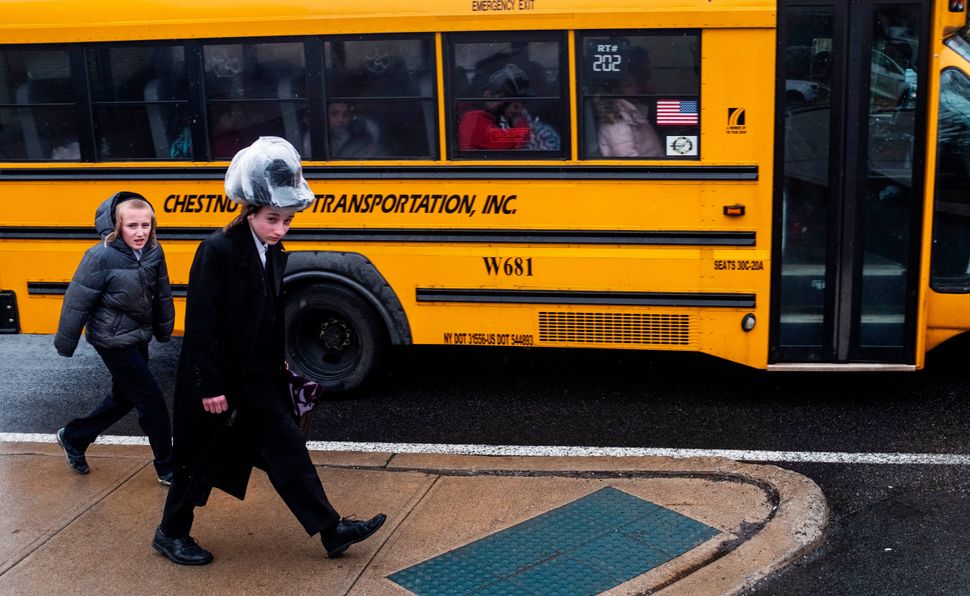 Two boys walking next to a school bus in a Jewish neighborhood in Monsey, Rockland County, New York Image by Getty Images

(JTA) — Two Jewish boys wearing kippahs were assaulted in a Toronto suburb while they were walking on Shabbat.

An 18-year-old male approached the boys, said to be 14, from behind as they walked in Thornhill, which has a large Jewish population. The assailant began swearing at the boys and then punched one of them in the face, following the boys as they left the area, before fleeing, B’nai Brith Canada said in a statement issued Sunday, a day after the incident.

The victims could not record the incident: It was Shabbat and they are observant and do not carry cellphones.

The boy hit in the face later went to an emergency room for treatment of his injuries.

The York Regional Police Hate Crimes Unit is investigating, according to B’nai Brith.

“This is an extremely serious incident, and we trust that law enforcement will give it the attention that it deserves,” said Michael Mostyn, chief executive officer of B’nai Brith Canada. “It is inconceivable that Jewish families will be afraid to send their children to the park, in a heavily Jewish neighborhood, on the Jewish Sabbath.”