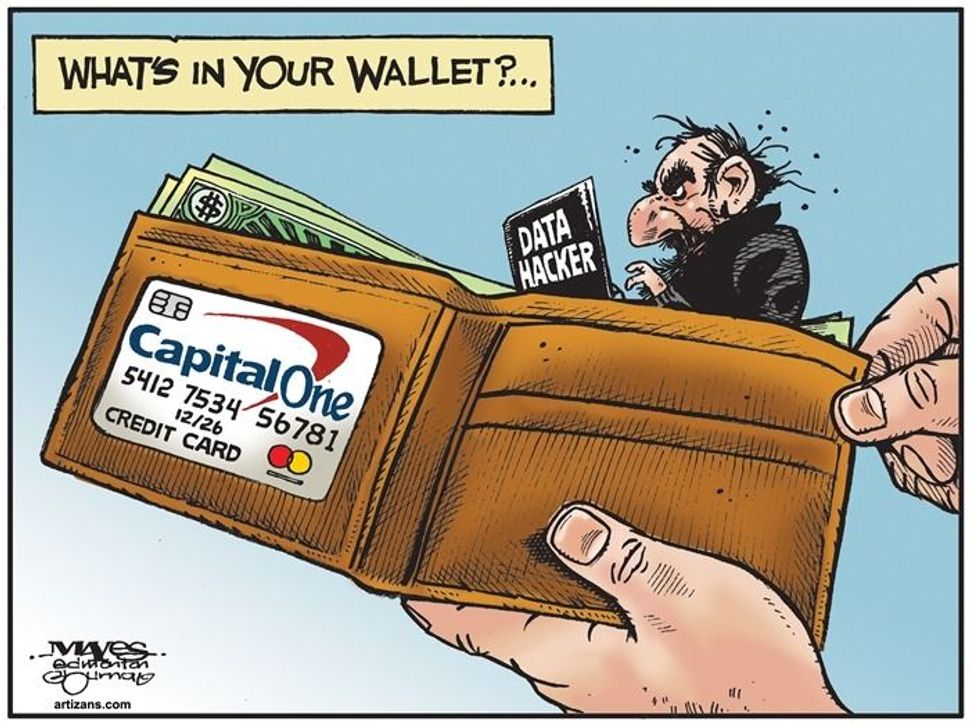 (JTA) — A Canadian newspaper that ran a cartoon seen as anti-Semitic has apologized following backlash from the local Jewish community.

The Edmonton Journal cartoon nearly two weeks ago by Malcolm Mayes was about a data breach that exposed personal information belonging to millions of Capital One customers featuring a “data hacker” sitting with a laptop inside a wallet. The hacker had a black beard and a large nose reminiscent of anti-Semitic caricatures of Jews.

“We are disgusted with Mr. Mayes’s cartoon, with your tacit approval of it in your willingness to publish it, or, alternatively, we are astonished by your willful blindness if you did not see the harm that this cartoon would cause,” Jewish Federation of Edmonton President Steven Shafir wrote to the paper’s editorial staff, according to the Canadian Jewish News.

According to Honest Reporting Canada, a pro-Israel advocacy group, “Mayes has a history of anti-Israel caricatures,” including one in which hands labeled Israel and Hamas are illustrated as pushing Palestinians into a meat grinder.

The Journal apologized on Friday, saying in a statement on its website that it has “been pointed out that the image of the person bears resemblance to anti-Semitic tropes prevalent in some anti-Jewish propaganda. This resemblance was entirely unintentional, but given that association, the Edmonton Journal apologizes for the publication of the cartoon. We are re-examining the procedures we have in place to vet editorial content to avoid future such occurrences.”

Earlier this year, The New York Times apologized for running what it called an “anti-Semitic political cartoon.”