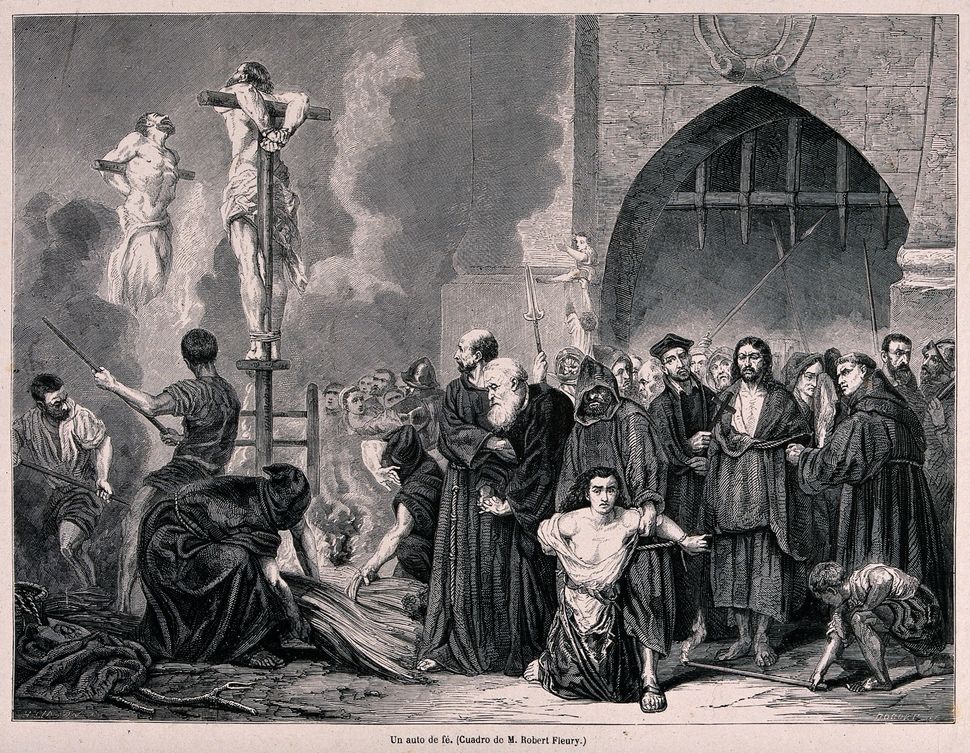 An “auto-da-fé,” the lethal ritual of public penance for being Jewish during the period of the Inquisition in Spain, when the country’s Jews either fled or were forcibly converted. Image by wikimedia

(JTA) – In a bid to reconnect with its Jewish history, the city of Marchena in southern Spain organized an international reunion for foreigners named after it.

The two-day gathering, that will begin Friday in the city of about 40,000 residents near Sevilla, was organized under the assumption that foreigners whose last names contains the city’s name are predominantly descendants of Sephardic Jews who left the area during the Spanish Inquisition to escape that campaign of religious persecution by the Church, the news site ABC reported Thursday. Jews who did not leave converted under threat of death, and are referred to as conversos or “crypto-Jews”

A nonprofit called Sepharad-Legado Sefardí, organized with the municipality the event, which is titled “First Journeys for the Jewish and Sephardic Memory of Marchena.” It was advertised on social media and in Spanish-language news sites.

Among those who accepted the invitation was Kenneth de Marchena, a Dutch Jew who was born in the Caribbean island of Curacao, ABC reported.

“How beautiful it is to be back in the city with our family name,” he wrote on Facebook about the trip. Kenneth de Marchena has spent years researching his ancestors’ life in the city, according to ABC.

The debate over who is and is not a crypto-Jew has been at a slow boil for decades. Many people have claimed that their family’s unusual traditions — such as not eating pork at family meals, or lighting candles on Friday nights — are clear evidence of Jewish ancestry, while some academics have posited other (less Jewish) explanations.

In 2013, former Forward staff writer Josh Nathan-Kazis went on a quixotic quest to become a Spanish citizen after the country passed a law allowing descendants of exiled Jews to apply for citizenship.