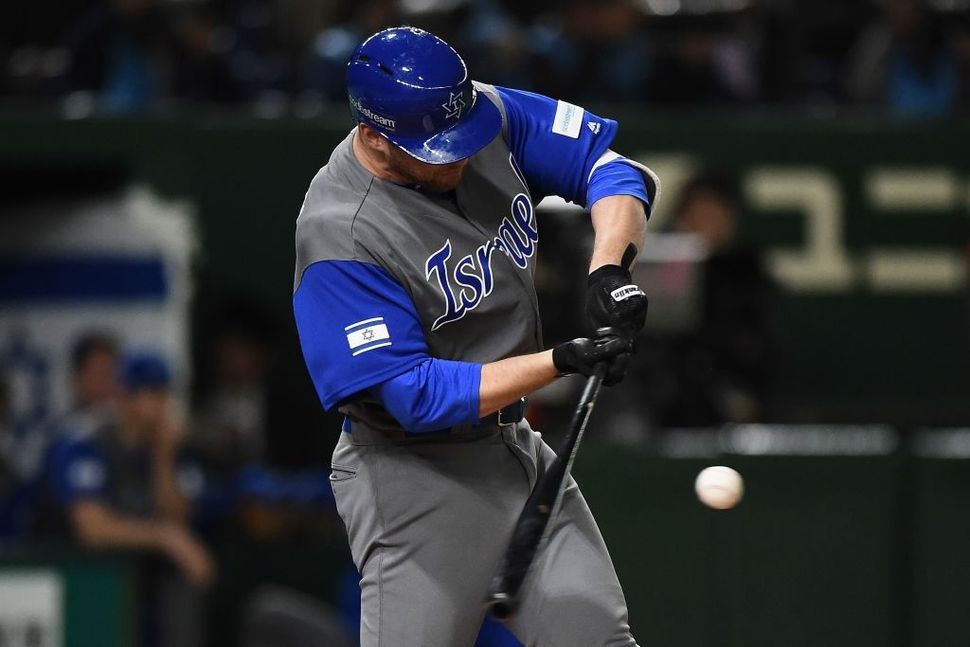 Infielder Nate Freiman of Israel takes an at-bat during the World Baseball Classic game between Israel and Japan at the Tokyo Dome on March 15, 2017. Image by Matt Roberts/Getty Images

(JTA) — In a historic first, Israel’s national baseball team qualified for a spot in the 2020 Tokyo Olympics.

The team defeated South Africa on Sunday at the Europe/Africa Qualifier tournament in Italy. It finished the qualifier with a record of 5-1.

Israel has become the only team besides Japan to qualify for next summer’s games.

The team advanced to the qualifier a week ago after coming in fourth place in the European Championships.

Baseball will be a featured sport at the 2020 Olympics, the first time the sport has made an appearance since 2008. It was added with no guarantee that it will return in 2024. The tournament will consist of six national teams, with Japan automatically receiving a spot as host nation. Three more qualifying events are scheduled between now and next summer’s games.

The Israeli team, which is packed with Jewish-American college players and some pros, had the country’s best showing in the last World Baseball Classic in 2017, surprising many by making the main tournament, where it finished sixth.

While the World Baseball Classic only requires that players be eligible for citizenship of the country they represent, for Olympic qualifying tournaments and for the actual Olympics players must be citizens of the country they represent. The majority of the national team players is Jewish Americans who received citizenship in order to play or Israelis who live in the United States.

The Israel Association of Baseball runs five leagues throughout the country for players ages 6 to adult. Its Israel Baseball Academy is recognized by Major League Baseball as the elite program for 14-21 year-old baseball players in Israel. Its Baseball Le’Kulam (For Everyone) program, brings together Jewish Israel and Arab Israeli 6th graders three times a year to learn to play baseball and to get to know one another.