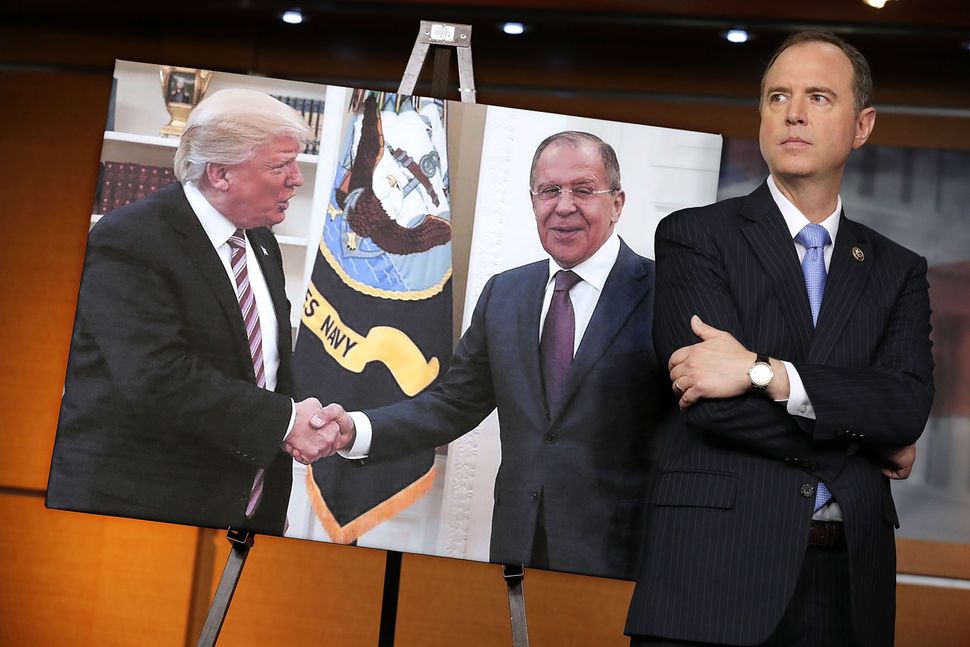 Schiff standing before a picture of Trump and the Russian diplomat Sergey Lavrov in 2017. Image by Getty

Rep. Adam Schiff (D-Calif.) has emerged as Donald Trump’s main punching bag as the impeachment inquiry mounts, the Daily Beast reported. Trump called Schiff a “fraud” and a “lowlife” and suggested that Schiff had helped write the whistleblower complaint that led to public awareness of a call between Trump and the president of Ukraine in which Trump asked for a “favor” with regards to Joe Biden and his son Hunter.

Trump latched onto reports from The New York Times that Schiff received a vague report, via an aide, of the whistleblower’s allegations ahead of the person filing their report.

“Well, I think it’s a scandal that [Schiff] knew before,” he said. “I’d go a step further: I think he’s probably helped write it. Okay? That’s what the word is.”

Trump suggested that Schiff resign, and that he be investigated for treason.

TRUMP on Adam Schiff: “They should look at him for treason.” pic.twitter.com/AwttLmIHmo

“I think Americans have to be worried about the stability of our president given the enormously erratic and dangerous swings we have seen him take in the last few days,” Schiff told The Daily Beast Wednesday. “It is alarming.”

Donald Trump, Jr., has embraced the elder Trump’s attacks on Schiff as well, linking Schiff to George Soros, the Jewish billionaire philanthropist who is the bogeyman of countless anti-Semitic conspiracy theories.

An intelligence community whistleblower is required to go to directly to the Inspector General, before going to congress. The fact that this anonymous whistleblower went first to seek partisan advice from a George Soros *puppet* tells you everything you need to know…

Surrogates for Trump have appeared on right-wing media to denounce Schiff. On Wednesday, House Minority Leader Kevin McCarthy appeared on Fox News and called for Schiff to be removed from the House Intelligence Committee for his “lies and deceit.” Sean Hannity, also on Fox, called Schiff a “proven liar.”