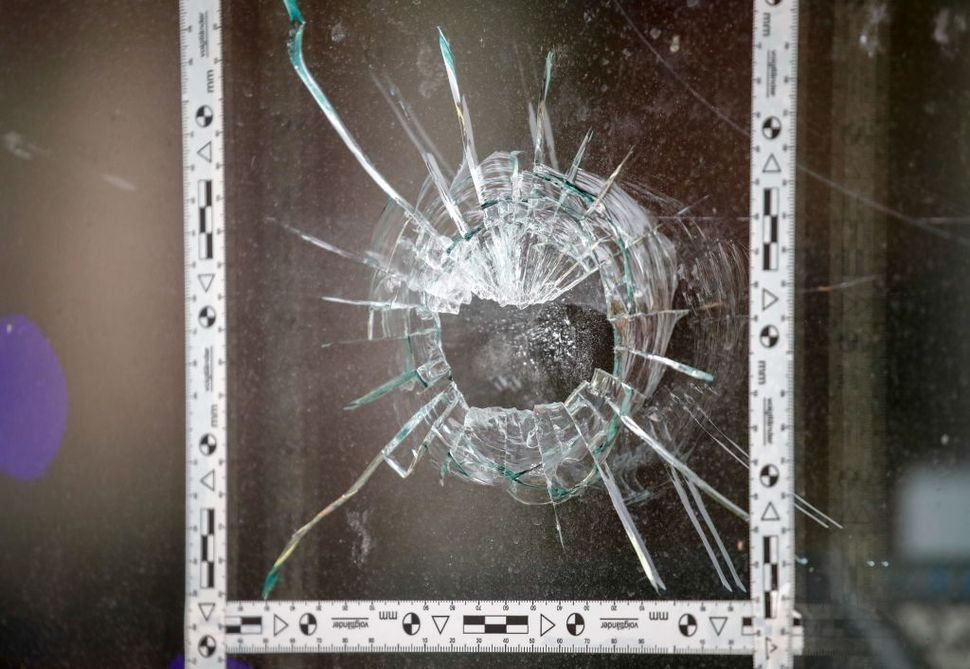 A bullet hole is seen on a restaurant window in Halle, eastern Germany, that was one of the sites of a shooting during which a heavily-armed man shot two people after failing in his attempt to attack a synagogue on Yom Kippur, October 10, 2019. Image by Getty Images

White nationalists have praised the alleged gunman behind the attempted synagogue shooting in Germany as a “saint,” Vice reported.

The praise for the shooter – who killed two people after being thwarted from entering a synagogue in the eastern city of Halle on Yom Kippur – was prevalent on Telegram, an encrypted messaging service once popular among ISIS members and since become increasingly popular among the global far-right.

The alleged shooter, known only as Stephan B. because of German privacy laws, livestreamed his shooting attempt on Twitch, a service owned by Amazon that is most popularly used to broadcast livestreams of video games. Around 2,200 people watched the livestream in the 30 minutes before the video was removed, Twitch said in a statement.

Stephan B., who during the livestream denied the Holocaust and said that “the root of all problems is the Jew,” was unable to open the synagogue’s doors. He then fled while firing his weapon, killing two bystanders.

The shooter also referred to himself as “Anon,” which users of the websites 4chan and 8chan often use to refer to themselves and each other. Multiple white nationalist shooters, such as the perpetrators of the attacks at a New Zealand mosque and an El Paso, Texas Walmart, have posted their manifestos to those websites. The New Zealand shooter, who also livestreamed his attack, is often referred to as a “saint” in white nationalist online discourse.