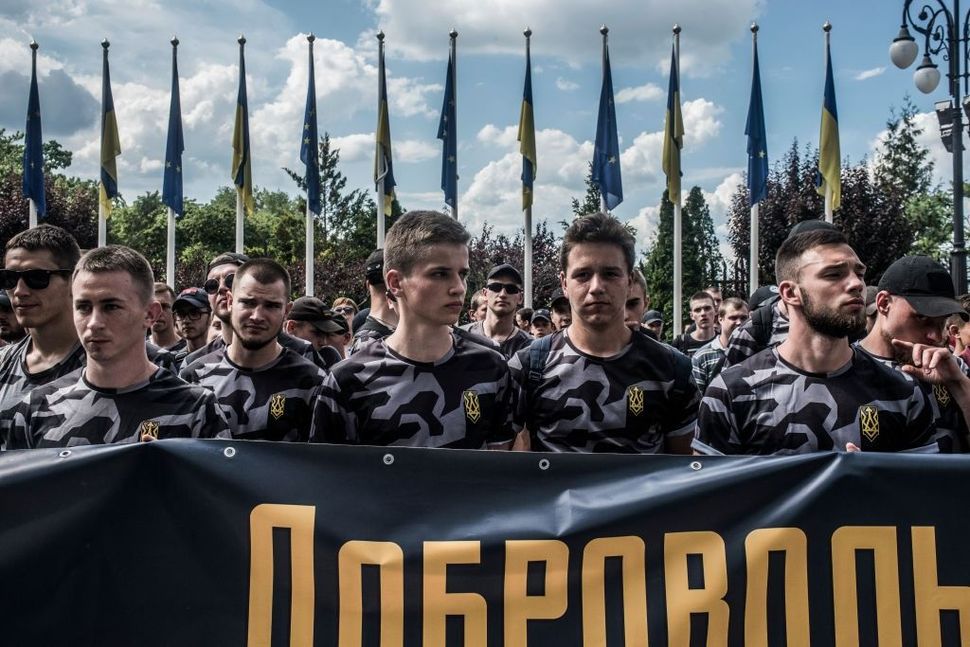 Soldiers, veterans and supporters of Azov Battalion hold a protest at the Ukrainian parliament, June 4, 2019 in Kyiv, Ukraine. Image by Martyn Aim/Getty Images

The letter urged regulators to list Ukraine’s Azov Battalion, Britain’s National Action and Scandinavia’s Nordic Resistance Movement on the State Deparment’s list of Foreign Terror Organizations. This would give security officials more tools to monitor and potentially prosecute Americans who correspond or train with those organizations.

There is no law specifically against domestic terrorism – partially due to the First Amendment’s protections of American racists’ rights to free speech. But it’s illegal to partner with groups on the foreign terror organization list, which is mostly comprised of radical Islamic groups. So putting those neo-Nazi groups on the list could help law enforcement prosecute Americans who affiliate with them and then plan or commit deadly acts in the United States.

Researchers who study the far-right say they’ve found connections between National Action and American Vanguard, a group whose members reportedly included the man who drove a car into counter-protesters in Charlottesville. And the alleged terrorist accused of killing dozens in the New Zealand mosque shooting had symbols associated with the Azov Battalion on his weapon (though the Ukrainian group denies any ties to him).

New York Rep. Max Rose, who is Jewish and spearheaded the letter, said he was disappointed that no Republicans signed on to his initiative.

“It’s curious to me that the Republican Party, for the better half of this year, are claiming they’re against anti-Semitism,” he told Vice. “Here they have an opportunity to label it, but they’re not willing to stand against it.”