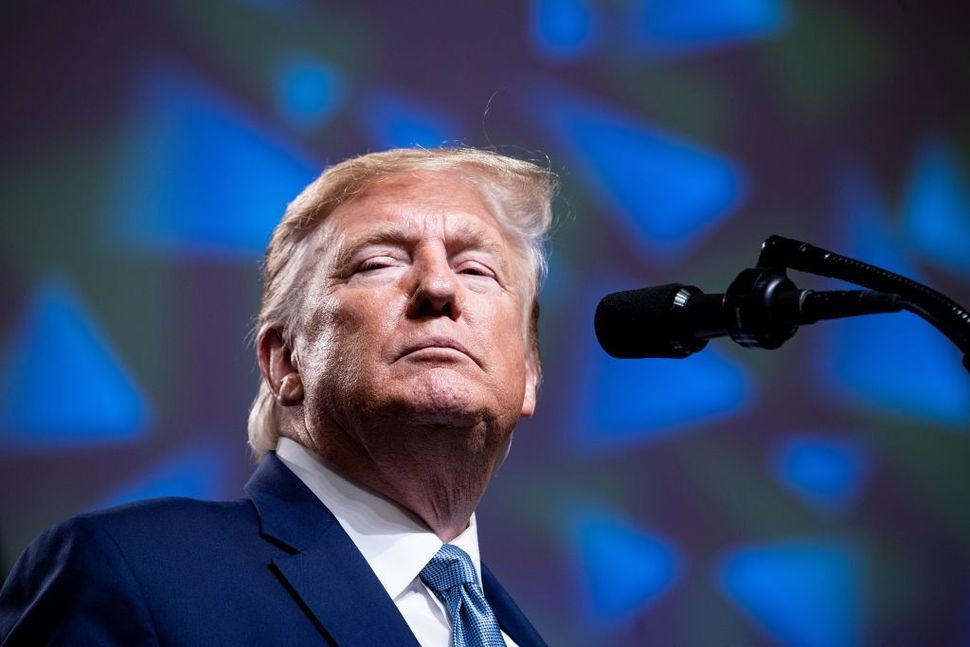 After a group of Jewish protesters disrupted President Trump’s speech at a fracking conference in Pittsburgh on Wednesday, Trump responded with an unexpected retort: “Go home to mom.”

Members of the Jewish group Bend the Arc: Jewish Action attempted to disrupt the speech at the David L. Lawrence Convention Center, chanting “Trump endangers Jews.” As they were ejected from the premises, Trump responded, “Don’t hurt him. Don’t hurt him, please. They don’t know they’re dealing with very tough people in this room.”

“Oh, they don’t know who they’re dealing with,” he continued, to laughter in the room. “They don’t know who they’re dealing with. They just don’t understand. All right. Go home to mom. Explain to mom that you tried to take on very powerful people, and many of them physically as well as mentally. That’s not a good thing to do — not in this room. Be careful. Make sure you don’t hurt them, please.”

Members of Bend the Arc had been arrested earlier that day for protesting outside the convention center. Trump’s visit to Pittsburgh came almost a year after the Tree of Life synagogue shooting, the deadliest anti-Semitic incident in American history (Bend the Arc also protested Trump after he visited the synagogue a few days after the incident).

Bend the Arc said in a statement that Trump’s anti-immigrant rhetoric had emboldened the alleged shooter, who reportedly targeted Tree of Life because it was hosting a Shabbat sponsored by the immigration-resettlement agency HIAS.

“The gunman who entered the synagogue a year ago was driven by fear and lies to kill Jewish people and stop new immigrants—but he didn’t invent these lies,” they said in a statement. “He heard them from the mouth of this President and the white nationalists this President and his allies have emboldened and enabled.”