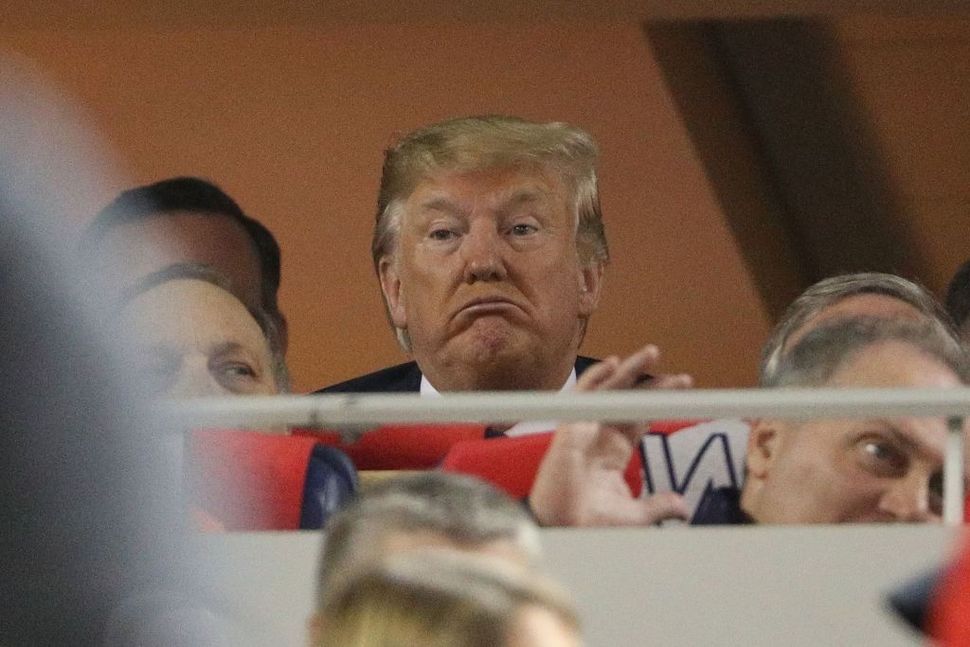 Donald Trump attends Game Five of the 2019 World Series between the Houston Astros and the Washington Nationals at Nationals Park on October 27, 2019 in Washington, DC. Image by Patrick Smith/Getty Images

The owners of the Washington Nationals didn’t want to sit with President Trump at a World Series game, so much so that they asked Major League Baseball to make sure they didn’t have to respond to any such requests, local news station WUSA9 reported Sunday.

President Trump announced that he would be attending Sunday’s Game Five of the World Series without consulting the team. Unlike presidents George W. Bush and Barack Obama, the only other presidents to have served during the Nationals’ history, Trump had not yet attended a Washington baseball game during his nearly three years in Washington.

The Lerner family, which owns the Nationals, asked the league office, which coordinated the presidential appearance, to make sure the Lerners wouldn’t be put in a position where they would have to turn down a White House request for Trump to sit with them, WUSA9 reported.

Trump ended up sitting in a different luxury suite away from the owners’ box, surrounded by First Lady Melania Trump and a coterie of Republican congressmen. He was harshly booed when he appeared on the Jumbotron.

A few days prior to the WUSA9 report, principal owner Mark Lerner was sanguine when asked by The Washington Post about the presidential visit.

“Well, he has every right to come,” Lerner said. “He’s the president of the United States whether you like him or not. It’s a special event. He should be at it.”

The Lerners are Jewish. Mark’s father Ted Lerner, who purchased the team in 2006, is a Conservative Jew and a prominent philanthropist supporting Jewish not-for-profits in the Washington area. The Lerners did not attend playoff games held on Yom Kippur in 2014 and 2019.

Correction, October 29: A previous version of this article stated that Ted Lerner is an Orthodox Jew. In fact, he belongs to a Conservative synagogue, though he was raised Orthodox.