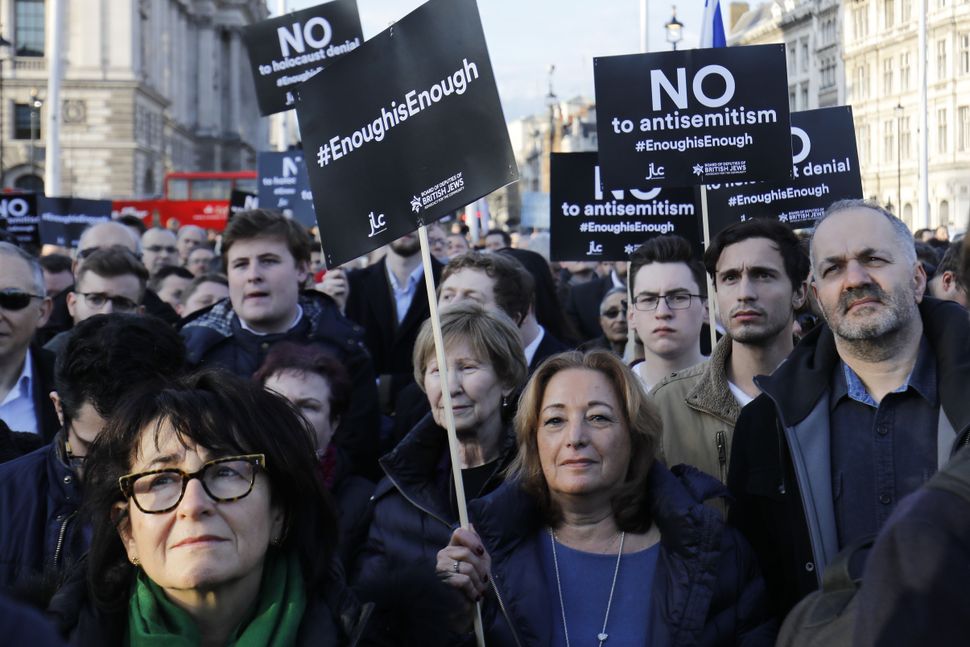 Members of the Jewish community hold a protest against Britain’s opposition Labour party leader Jeremy Corbyn and anti-semitism in the Labour party, outside the British Houses of Parliament in central London on March 26, 2018. Image by Getty

A prominent rabbi, writer and broadcaster in the U.K. has taken the unprecedented step of urging his congregation to vote against Labour in the country’s upcoming elections to push back against the party’s history of anti-Semitic rhetoric, even with Brexit on the horizon. The rabbi singled out the party’s leader, Jeremy Corbyn, who has been accused of using anti-Semitic dog whistles and not doing enough to rid his party of anti-Semitic politicians.

Rabbi Jonathan Romain, leader of the Maidenhead Synagogue in southern England and the former head of the Reform movement in the UK, sent his letter to his synagogue’s over 800 member families, the Jewish Chronicle reported. He argued that “a Corbyn-led government would pose a danger to Jewish life as we know it.”

On December 12, the U.K. will hold its third general election in five years. At stake is whether the country will go through with its exit from the European Union. Prime Minister Boris Johnson, who called for the latest election and is determined to make Brexit happen, is seeking a stronger majority for his Conservative Party. Corbyn agreed to the election, hoping to take back control of Parliament for the Labour party.

Romain stressed that it is not the Labour party itself that is anti-Semitic, but rather Corbyn who has let anti-Semitism into the party.

“I am therefore suggesting we should each put aside all other considerations and vote for whichever party is most likely to defeat Labour in whatever constituency we are in – even if we would never normally vote for that party,” he wrote.

Romain’s letter comes as a recent poll found that 93% of U.K. Jews said they would not be voting for Labour in the elections, even if they are wary of Johnson and do not support Brexit.