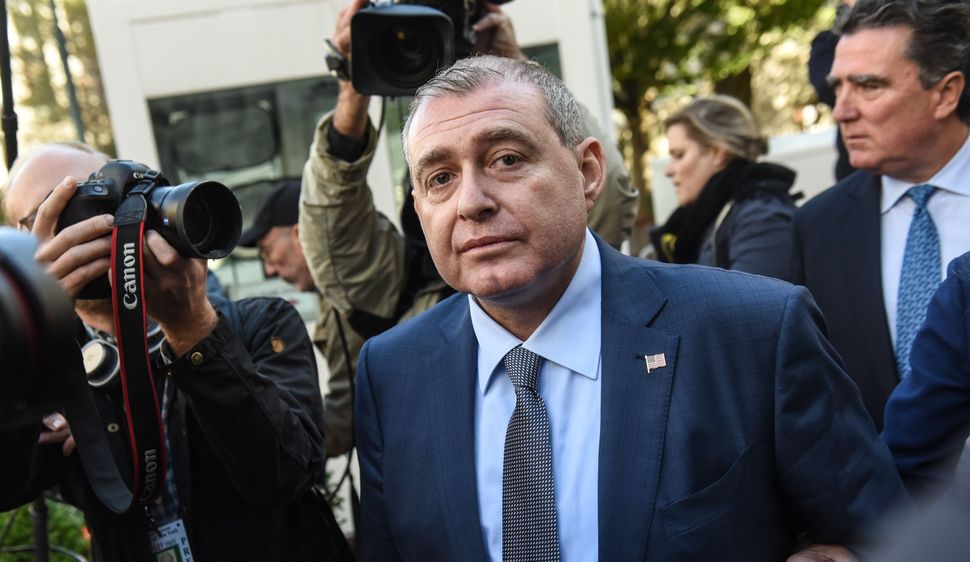 Lev Parnas arrives at federal court for an arraignment hearing on October 23, 2019 in New York City. Image by Getty

If you start a fraud-insurance company in Florida, what might you call it? Fraud Protector, perhaps. Fraud Knight. Never-Fraud!

Yet Lev Parnas, one of the Ukrainian associates of Rudy Giuliani, who has been implicated in the Ukraine imbroglio that led to the impeachment inquiry, came up with an unusual name for his fraud-insurance firm: Fraud Guarantee.

The name was a source of confusion when the company was first publicized. The mystery was deepened by the fact that the company, founded in 2013, has had no customers and generated no revenue. It has become central to the Ukraine story because the company paid Giuliani, Donald Trump’s personal lawyer, half a million dollars in 2018. Giuliani said the payment related to business consulting. Earlier this month, Parnas and an associate, Igor Fruman — both of whom are Jewish — were arrested as they prepared to leave the country on charges that they were using donations to American politicians to illegally try to influence the U.S.-Ukraine relationship.

Now, the Wall Street Journal has connected the dots on the name Fraud Guarantee. After several incidents in which Parnas was himself accused of fraud, he picked the name “in part to clean up his Google search results, ensuring that the word ‘fraud’ and his own name would be paired in a positive light,” unnamed sources told the Journal.

One source told the Journal that the strategy worked. Search results showing Parnas’ links to earlier frauds — including a failed penny-stock tech company and a half-million dollar “bridge loan” that was allegedly stolen from a wealthy New York family — were less visible.