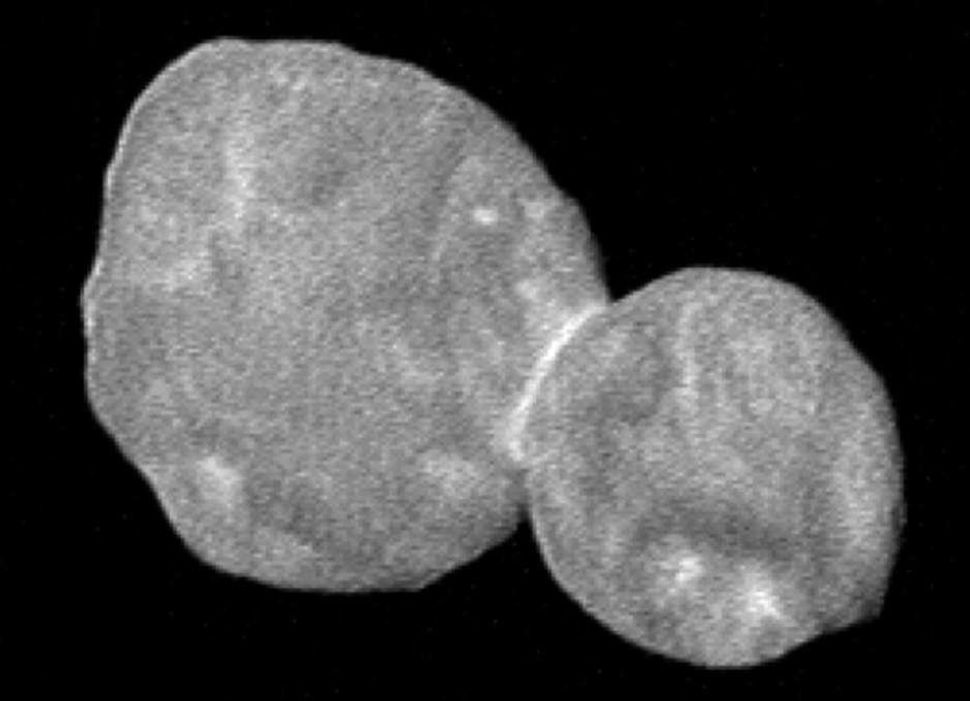 An image of Arrokoth (formerly Ultima Thule) taken by the New Horizons spacecraft. Image by NASA

(JTA) — NASA has renamed the most distant object ever explored by a spacecraft after it was criticized for calling it by a name with Nazi connotations.

It will now be called Arrokoth, which means “sky” in the Native American Powhatan language.

The trans-Neptunian object’s official designation is 2014 MU69, but NASA scientists considered some 34,000 names as part of a public competition in 2017 before calling the icy rock object Ultima Thule.

Ultima Thule comes from classical and medieval literature and means any distant place located beyond the “borders of the known world.” But NASA apparently did not realize that Ultima Thule [pronounced TOO-leh) was a term used by the forerunners of the Nazi Party and is still used by some extreme right groups as part of their mythology.

In Germany, extreme right occultists believed in a historical Thule, also called Hyperborea, as the ancient homeland of the Aryan race. The Thule Society, founded in 1918 around this and other occultist beliefs, later became the Nazi Party.

The new official name, which was ratified by the International Astronomical Union, was announced in a ceremony Tuesday at NASA headquarters, AFP reported.

“The name ‘Arrokoth’ reflects the inspiration of looking to the skies and wondering about the stars and worlds beyond our own,” said Alan Stern, New Horizons principal investigator from the Southwest Research Institute in Boulder, Colorado. New Horizons is the name of the spacecraft that flew by the cosmic body to survey it.

NASA told AFP that Ultima Thule was only a nickname.