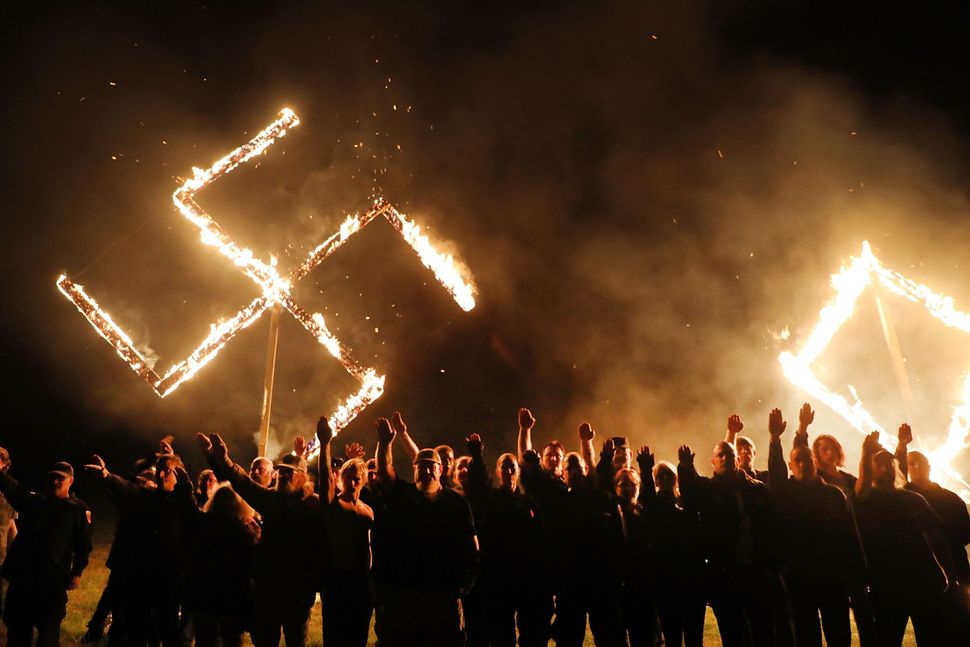 Members of the National Socialist Movement burn a swastika and a rune after a Georgia protest. Image by Spencer Platt/Getty Images

(JTA) — A New Jersey man, 18, was arrested and held without bond for allegedly ordering the vandalism of two synagogues in other states.

Richard Tobin is accused of using a neo-Nazi social network called The Base to find volunteers to for the September graffiti attacks on synagogues in Michigan and Wisconsin, the Philadelphia Inquirer reported.

Tobin also allegedly said he planned the attacks as part of nationwide campaign he called “Operation Kristallnacht,” a reference to the 1938 pogrom against Jewish homes, synagogues and Jewish owned-owned businesses in Germany and Austria.

Tobin also confessed to driving to a New Jersey mall with a machete that he planned to use to kill black shoppers.

A complaint filed Tuesday by the FBI charges Tobin with conspiring with a hate group against the rights of minorities, including Jews, NJ.com reported.

The group calls itself a “white protection league” and advocates for a country populated only by white people. Its members practice “doomsday prepping,” or preparing for the end of the world, and participate in military training. The group’s symbol references a failed 1923 German coup led by Adolf Hitler, according to the FBI.

The court filings have not named the people who attacked the two synagogues.