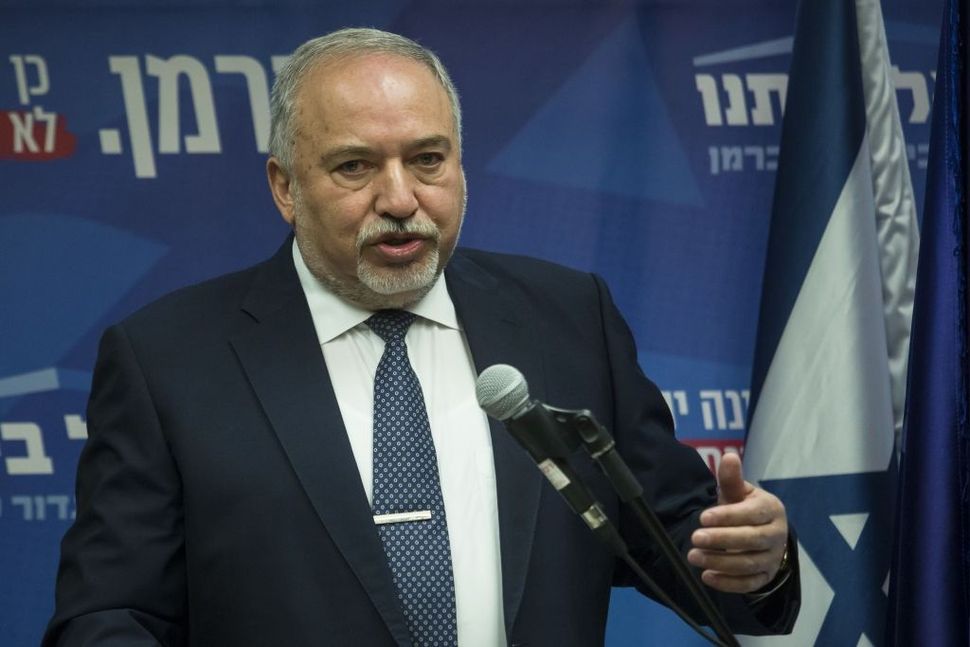 Avigdor Liberman, head of the Yisrael Beitenu party, speaks to the press on November 20, 2019 in Jerusalem, Israel. Image by Amir Levy/Getty Images

Yisrael Beiteinu party leader Avigdor Liberman announced Wednesday that his party would refuse to join a governing coalition led by Prime Minister Benjamin Netanyahu or a minority government chaired opposition leader Benny Gantz, likely ensuring that a third round of elections will be held next March.

“There is no chance. We will not join either a limited right- or left-wing government or a minority government,” Liberman told supporters. “Whatever sort of government that would be, it would not survive and would not be able to function to do what is needed for the country.”

Both of the two Israeli elections held this year were inconclusive, with neither side able to form a governing majority coalition. Gantz has less than 24 hours remaining to reach a majority before his mandate expires, but negotiations with Netanyahu have so far been unfruitful.

Neither Gantz nor Netanyahu can form a majority without either the other or Liberman, but Liberman has said that he wants a unity government between the three of them, with the power of prime minister rotating between them.

“Members of Knesset don’t want to go to another election,” explained Yuval Shany, the vice president of the Israel Democracy Institute. “The problem is that you have a significant deadlock between Netanyahu and Gantz – who goes first as prime minister, and whether Gantz will be willing to sit under Netanyahu if he’s indicted.” (Full disclosure: I interned for the IDI for a college semester)

Should Gantz’s deadline expire, members of Knesset will have 21 days to select a leader among themselves, but the prospect of one of them garnering majority support is slim.