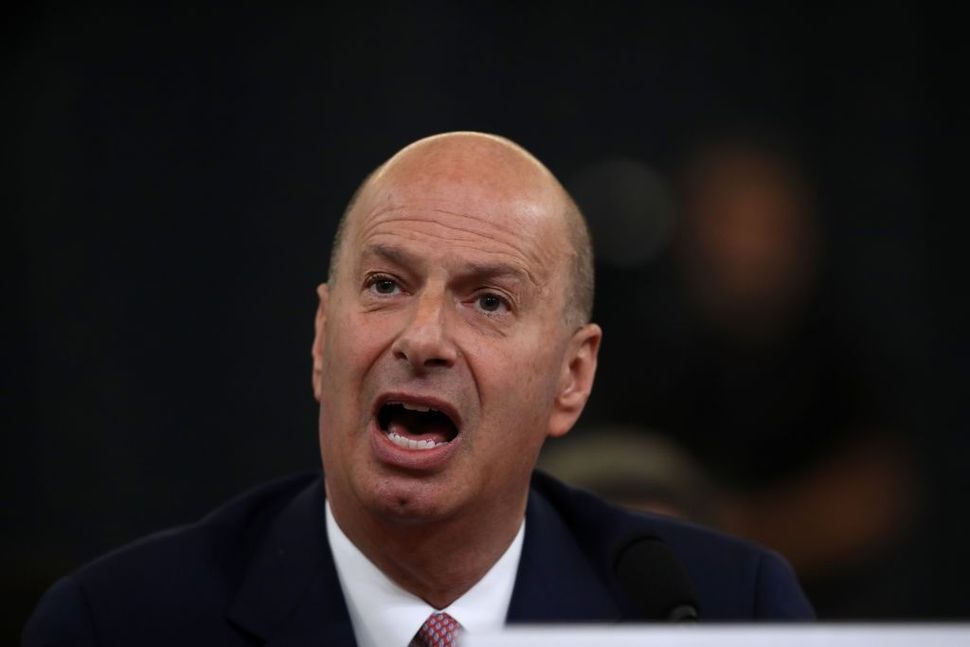 Gordon Sondland, the U.S ambassador to the European Union, makes an opening statement before testifying to the House Intelligence Committee, November 20, 2019 in Washington, DC. Image by Drew Angerer/Getty Images

United States Ambassador to the European Union Gordon Sondland cited his family’s history fleeing the Nazis before World War II during his opening statement to the House of Representatives’s impeachment hearing on Wednesday.

Sondland explained that being the child of German-Jewish refugees was formative for him. “Like so many immigrants, my family was eager for freedom and hungry for opportunity,” he said. “They raised my sister and me to be humble, hardworking and patriotic, and I am forever grateful for the sacrifices they made on our behalf.”

Sondland, a hotelier who was named ambassador after donating $1 million to President Trump’s inauguration committee, told Congress there was a quid pro quo between Ukrainian president Volodymyr Zelensky achieving a White House meeting with President Trump and the Ukrainian government proceeding on investigations that could damage former vice president Joe Biden.

Sondland’s testimony came a day after the appearance of Lt. Col. Alexander Vindman, who like Sondland was the son of European Jewish refugees, in his case from the former Soviet Union.

Vindman said that he joined the military because he “wanted to spend my life serving the nation that gave my family refuge from authoritarian oppression,” and reassured his father that he would not face negative consequences for testifying because “this is America.”

The Army has since given his family 24-hour police protection after Trump accused him of being politically biased against him.