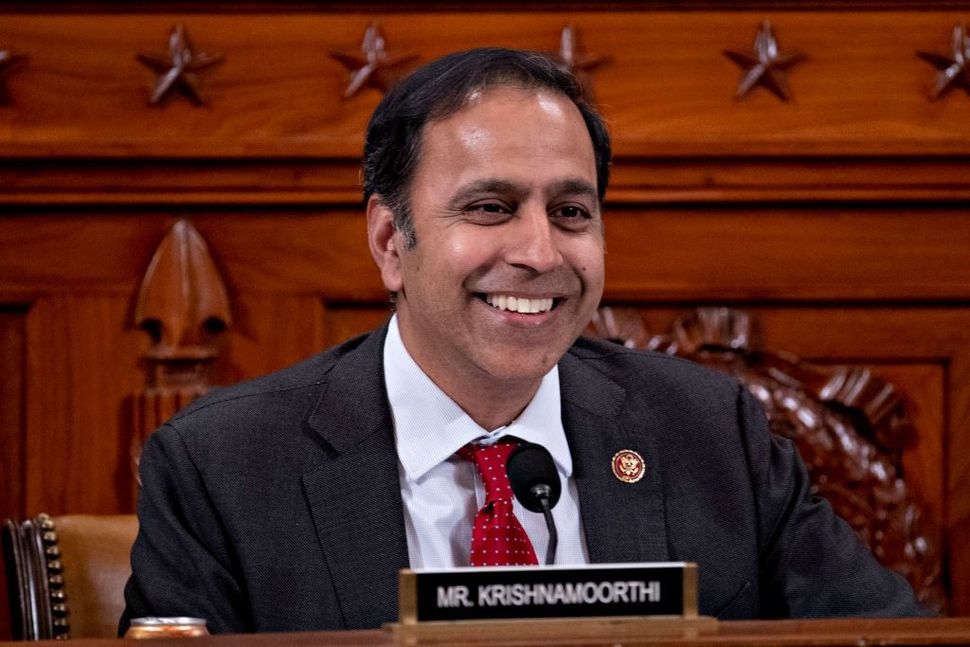 Krishnamoorthi is in his second term representing Illinois’s 8th congressional district in the Chicago suburbs. The district, which includes cities like Schaumberg and Elk Grove Village, has around 20,000 Jews, comprising nearly 3% of the population – slightly above average for a congressional district, according to a study published by the Berman Jewish Databank in 2014.

Krishnamoorthi was born in India but immigrated with his family to the United States when he was three months old. After graduating from Princeton University and Harvard Law School, he worked on Barack Obama’s 2004 Senate campaign before serving as Illinois’s deputy state treasurer and special assistant attorney general. He was elected to Congress in 2017.

Krishnamoorthi told Jewish Insider last year that he considers himself a “Hin-Jew, a Hindu with a great affection for the Jewish people.” He said that he sent his children to preschool at the local Jewish Community Center, “so they were in some ways culturally Jewish, even at the same time they were religiously Hindus.”

He was among the Democrats who criticized fellow Democratic Rep. Ilhan Omar’s comments about Jewish money being behind congressional support for Israel, calling her language “insensitive and wrong.” But he also said it was a “serious mistake” for Israel to ban Omar and Rep. Rashida Tlaib from entering the country due to their support of the boycott-Israel movement.

During the hearing on Thursday, Krishnamoorthi cited claims from conspiracy theorists that Hill and former Ambassador to Ukraine Marie Yovanovitch were somehow tied to Soros, and that Vindman, a Jewish immigrant born in Ukraine, had had his loyalty questioned by some defenders of the president.

“Would you say that these different theories, these conspiracy theories targeting you, spun in part by people like [Roger] Stone, as well as fueled by Rudy Giuliani and others, basically have a tinge of anti-Semitism to them, at least?” he asked.

“Well, certainly when they involve George Soros, they do,” Hill replied. She went on to compare the theories to the Protocols of the Elders of Zion, the century-old anti-Semitic propaganda publication alleging Jewish plots to control the world.

Fiona Hill says “the longest-running anti-Semitic trope” against George Soros — that she and Amb. Yovanovitch were also targets of — are the new Protocols of the Elders of Zion.” pic.twitter.com/WZOgzhiGto