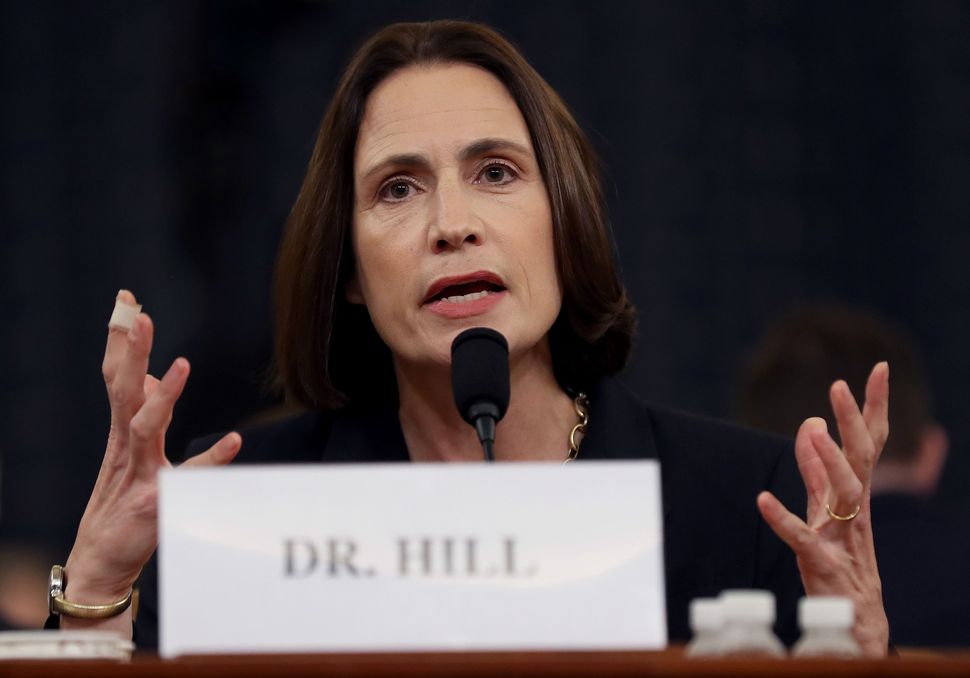 The Protocols of the Elders of Zion came up today at the Congressional impeachment hearings that are probing whether President Trump tried to bribe another head of state for political purposes.

The Protocols are a fake book that purports to document a Jewish plan to achieve world domination.

At the hearing, Rep. Raja Krishnamoorthi (D-Ill.) asked Fiona Hill, the National Security Council’s former senior director for Europe and Russia, if conspiracy theories about her role in the Ukraine scandal have an “anti-Semitic tinge” to them.

Hill said that they do, especially when they involve George Soros, the Hungarian Jewish billionaire and philanthropist who is a longtime boogeyman for far right conspiracy theorists. Soros has, among many other things, been accused of funding the caravan of migrants that arrived at the U.S. border last year and of being tied financially to Greta Thunberg, the teenage climate change activist.

“The trope against Mr. Soros was also created for political purposes,” Hill said. “This is the new ‘Protocols of the Elders of Zion.’”

What are the ‘Protocols’?

“Protocols” is perhaps the most famous piece of anti-Semitic propaganda ever produced. It was created by Russian secret police in the early years of the 20th century, as a means to stir up anti-Semitic animus. Ironically, the text prepared by the Russian officials was lifted almost wholesale from a French satirical pamphlet from the 1860s that — get this — made no reference to Jews. (It was about Napoleon III’s repressive tendencies.)

The book purports to be the notes from a secret meeting of Jewish leaders. (Prominent Jews had recently begun convening the Zionist Congresses that would develop support for the idea of a Jewish homeland.) In that meeting, Jews allegedly discuss how to gain world domination through manipulation of the global financial markets and the media.

Sound familiar? The book migrated to America with the help of Henry Ford, a notorious anti-Semite, who had his Dearborn Independent newspaper publish a series of articles based on the “Protocols.” The book made from those articles, “The International Jew,” was eventually published in 16 languages, and made its way back to Europe — Adolf Hitler said he was influenced by it.

The “Protocols” live on today in the words of far right European politicians — like a Polish politician who once praised the book, or a Greek politician who read the book aloud in the country’s parliament — at book fairs in Abu Dhabi (the book was made available across the Arab world by the Soviet government) and for sale on Amazon.com.

Thursday was not the first time Hill has brought up anti-Semitic conspiracy theories in her impeachment testimony. Indeed, she said Thursday that she had considered writing a book about the Soros theories before joining the Trump administration.

In her October 14th closed-door testimony before impeachment investigators, the transcript of which was made public earlier this month, Hill recounted receiving death threats and hateful messages, which were accompanied by accusations that Hill is tied to Soros. She noted that Ukrainian Ambassador Marie Yovanovitch received similar calls.

“Now, I’m not easily intimidated, but that made me mad,” Hill said, according to the transcript. “And when I saw this happening to Ambassador Yovanovitch again, I was furious, because this is, again, just this whipping up of what is frankly an anti-Semitic conspiracy theory about George Soros to basically target nonpartisan career officials, and also some political appointees as well, because I just want to say this: This is not indiscriminate in its attacks.”