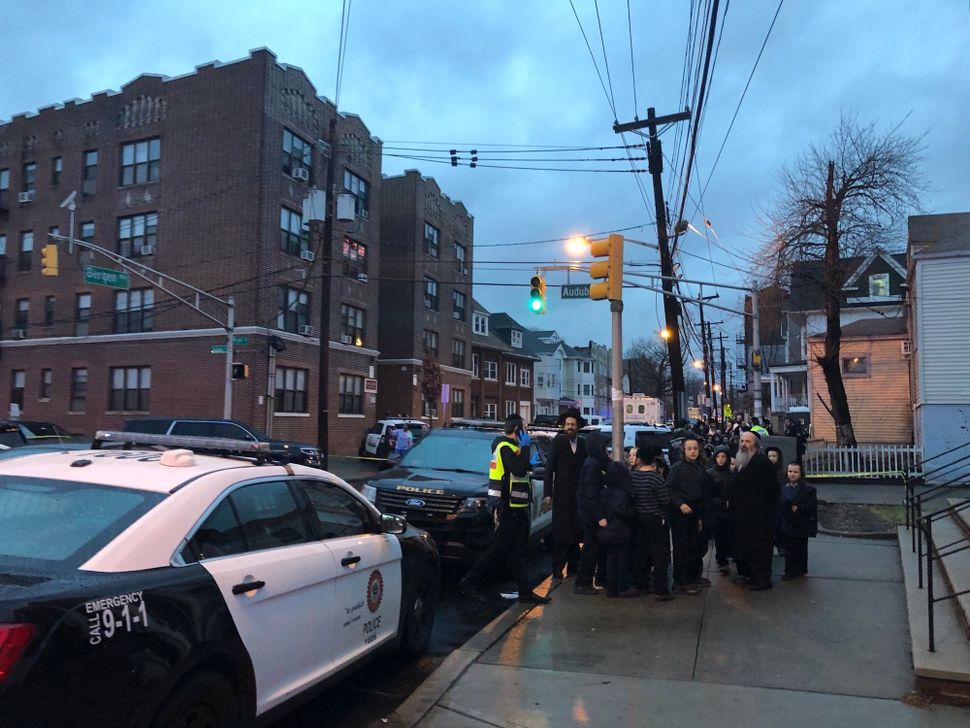 Jewish students are able to leave their school after lockdown procedures were ended following a shootout at a kosher grocery store in Jersey City, New Jersey. Image by Ari Feldman/The Forward

One of the suspects in the Jersey City, N.J. shooting that left six people dead, including five at a kosher grocery store, had written anti-Semitic social media posts, a law enforcement official told The New York Times.

Jersey City mayor Steven Fulop wrote on Twitter on Wednesday that the two suspects, who also allegedly shot a police officer at a cemetery before driving to the JC Kosher Supermarket, had “targeted” the store.

Local news station NBC 4 identified the suspects as David Anderson and Francine Graham, citing four law enforcement sources. Three sources said that Anderson was a former follower of the Hebrew Israelite movement. A note with religious writings was found in the U-Haul that the suspects allegedly drove to the supermarket. Anderson received three years of probation for an incident in 2004, was arrested in New Jersey on weapons charges in 2007 and in Ohio for criminal mischief in 2009, NBC News reported.

Adherents to the Hebrew Israelite movement, also sometimes called Black Hebrews, believe that African-Americans are the “real” descendants of the biblical Children of Israel and that white Jews are “imposters.” Heidi Beirich, the leader of the Southern Poverty Law Center’s Intelligence Project, told the Forward last month that black nationalist groups like the Hebrew Israelites and the Nation of Islam had grown three years in a row, partially in response to the parallel growth in white nationalism.

For more on the Hebrew Israelites, read our explainer here.

An account associated with Anderson also produced anti-police content, according to reports. The first victim of the shooting was Detective Joe Seals, a 15-year Jersey City Police Department veteran who had approached the suspects at a cemetery near the kosher market.

The two shooters were among the five killed in the grocery store.