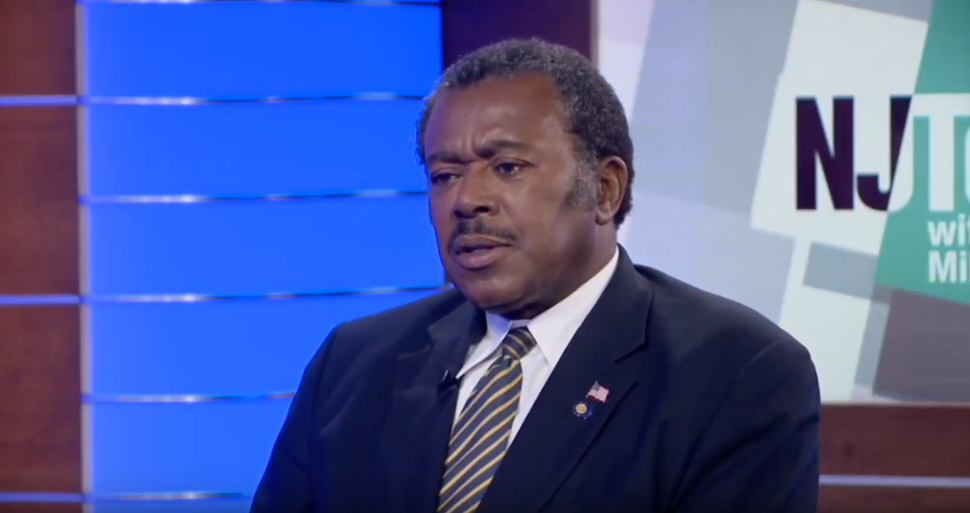 A New Jersey NAACP leader was suspended from his position for six months after delivering a 20-minute speech in a community forum about his issues with the local Orthodox Jewish population, the news site Montclair Local reported.

The Montclair NAACP’s executive committee unanimously voted Tuesday for James Harris to temporarily step down as chair of the organization’s education committee, a week after he complained about “folks in long black suits and curly locks” supposedly displacing African-Americans.

“Some of Mr. Harris’s overall comments and tone that evening were in clear contradiction of the NAACP’s mission and thus the Montclair Branch condemns them,” chapter president Al Pelham said in a statement.

Harris also issued an apology on Monday, before the vote to remove him.

“I would like to express my sincere regret and apologize for the remarks I made about the Hasidic community and the development of Montclair, NJ,” he wrote. “My personal statement was meant to focus on the impact of gentrification on lower socioeconomic communities in Montclair, NJ. Instead, I used a regional example of Lakewood, NJ real estate and public education funding. Unfortunately I used terms and examples that have been interpreted as anti-Semitic.” Harris did not respond to Montclair Local’s request for comment after the suspension.

As the the local news site Tap Into Montclair reported last week, Harris, who is also the chair of the New Jersey Association of Black Educators, complained at the community forum that the Jewish community in Lakewood, N.J., a city that is more than half-Jewish, “controls” the local school board and city council and “gutted” public school funding to the detriment of black and Latino students. He then compared the situation to the massive school budget deficit in Jersey City, which has a Hasidic population of about 100 families and was the site last month of a deadly shooting at a kosher supermarket. (There are no Hasidic Jews on the Jersey City city council or Board of Education)

Harris described Jersey City’s Hasidic Jews as unfriendly “folks in long black suits and curly locks” who want to buy up properties, and claimed residents were afraid of those Jews, and particularly frightened of being displaced “because people remember Brooklyn and Lakewood.” He also complained that the supermarket shooting had gotten more attention than other murders in the city that had victimized people of color.

Harris ended his speech to some applause from the audience, which was criticized by Rabbi David Greenstein of local synagogue Congregation Shomrei Emunah. “If you take the word ‘Hasidics’ out and replace the word with ‘blacks,’ this whole room would be in an uproar,” he said.

“To generalize and to paint with that kind of broad brush, a situation that is so much more painful and complicated, is a sin,” he added. Greenstein’s remarks were also applauded.

Harris’s remarks were similar to those of Jersey City Board of Education trustee Joan Terrell-Paige, who wrote a Facebook comment after the shooting that blamed Jews for gentrification in her city and asking whether people could be “brave enough to explore the answer” to the supermarket shooters’ “message.” Terrell-Paige was condemned by New Jersey Gov. Phil Murphy and Jersey City Mayor Steven Fulop, but defended by some local figures.