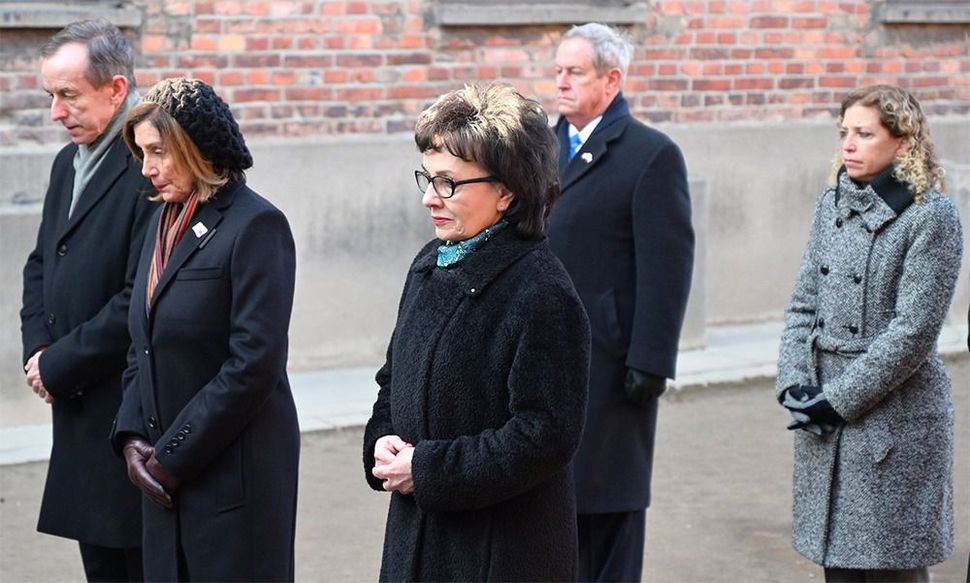 House Speaker Nancy Pelosi, leading a congressional delegation to Poland to commemorate 75 years since the liberation of Auschwitz, laid a wreath at the former Nazi camp on Tuesday, January 21, 2020. Image by Twitter/KancelariaSejmu

(JTA) — House Speaker Nancy Pelosi, leading a congressional delegation to Poland and Israel to commemorate 75 years since the liberation of Auschwitz, laid a wreath at the former Nazi camp on Tuesday.

Pelosi joined her Polish counterpart, Elzbieta Witek, the speaker of the Sejm, the lower house of parliament, and Polish Senate Speaker Tomasz Grodzki in the wreath laying next to the Auschwitz death wall, the site of inmate executions.

“It is an honor to lead a distinguished bipartisan delegation to Poland and Israel to solemnly commemorate the horrors of the Shoah and to reaffirm America’s enduring commitment to our sacred pledge: Never Again,” Pelosi said in a statement before leaving for Poland. “We must honor the memories of those murdered in this incomprehensible horror by maintaining constant vigilance against hatred and persecution today. In the face of rising anti-Semitism and appalling acts of bigotry around the world, we must all renew our determination to defend human rights and human dignity. May the lives of all lost in the Shoah continue to be a source of moral action to the world today.”

Some 1.1 million people, mostly Jews, were killed at Auschwitz-Birkenau between 1940 and 1945. On Jan. 27, the annual World Holocaust Remembrance Day commemoration marks 75 years since Auschwitz was liberated by Soviet forces.

Pelosi and six Congress members will travel on Wednesday to Israel to participate the following day in the 5th World Holocaust Forum at Yad Vashem in Jerusalem.