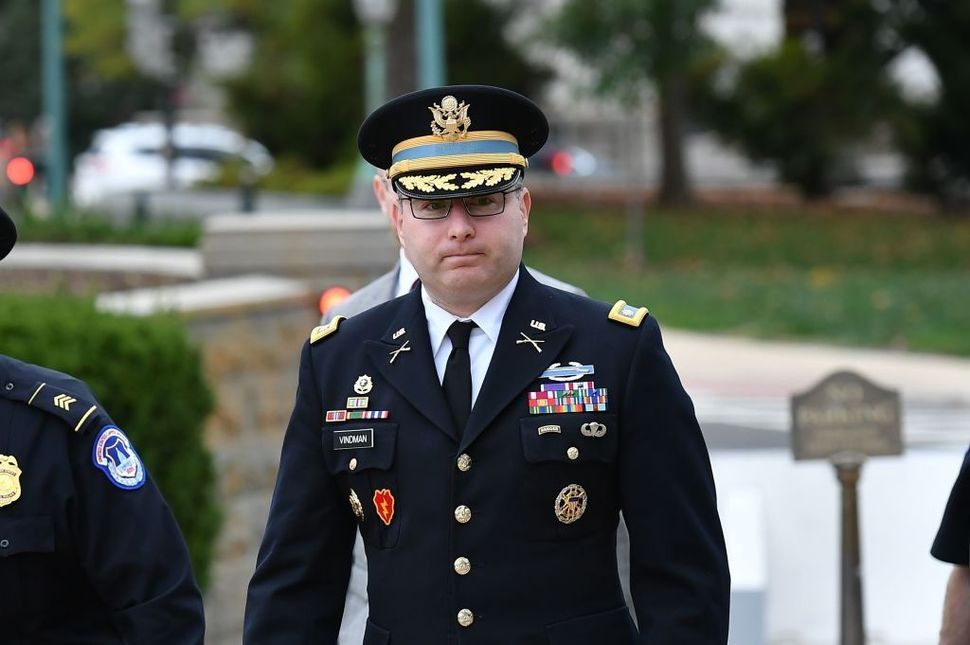 National Security Council Director for European Affairs Alexander Vindman arrives for a closed-door deposition at the Capitol in Washington, DC on October 29, 2019. Image by MANDEL NGAN/AFP via Getty Images

(JTA) — Alexander Vindman’s synagogue in Springfield, Virginia, is accepting letters of support in his behalf.

Vindman, the Jewish staffer who was among the first to raise flags about President Donald Trump’s pressure on Ukraine to investigate a political rival, was removed from his position as an expert on U.S. policy in Ukraine at the National Security Council on Friday.

In addition, for those seeking ways to show support, the Vindman family has requested donations be made to the synagogue via http://www.adatreyim.org in Alexander Vindman’s honor.

Trump also recalled Gordon Sondland, U.S. ambassador to the European Union. Both Vindman and Sondland testified against Trump in the U.S. House of Representatives, providing damaging testimony that led to Trump’s impeachment. Their removal comes just days after Trump was acquitted by the Republican-led U.S. Senate in an impeachment trial.

Also Friday, Vindman’s twin brother, Lt. Col. Yevgeny Vindman, was asked to leave his job as a White House lawyer. Both Vindmans, Jews who immigrated with their father from Ukraine in 1979, were reassigned to the Army.

Vindman said during his testimony that his father feared that his speaking out would bring retaliation.