“We can give away our democracy,” Vindman said.

The Jewish National Security Council staffer in an op-ed compared the U.S. under Trump to the authoritarian regime in Ukraine his family fled.

“Vindman’s patriotism is incomprehensible to the likes of Donald Trump, but it is at the heart of America’s strength.”

Vindman’s attorney said his client was subject to a “campaign of bullying, intimidation and retaliation” 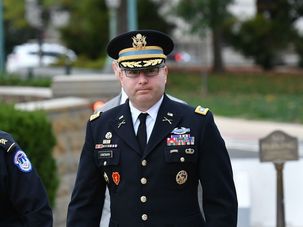 Vindman was among the first to raise flags about President Donald Trump’s pressure on Ukraine to investigate a political rival.

Alexander Vindman testified that his father, who in the 1970s fled from the former Soviet Union with his Jewish family, feared that his speaking

The war hero’s real injury was a less intimate matter.

Fiona Hill felt that Alexander Vindman didn’t have the “antenna” to navigate a process that had been politicized by Trump and his administration.

Vindman: I Knew Testifying Would Be Okay Because ‘This Is America’

Lt. Col. Alexander Vindman, a key figure in the impeachment proceedings and a Ukrainian Jewish refugee, testified to Congress.