In ‘Curb,’ not even Alexander Vindman is safe from Larry David’s warped worldview 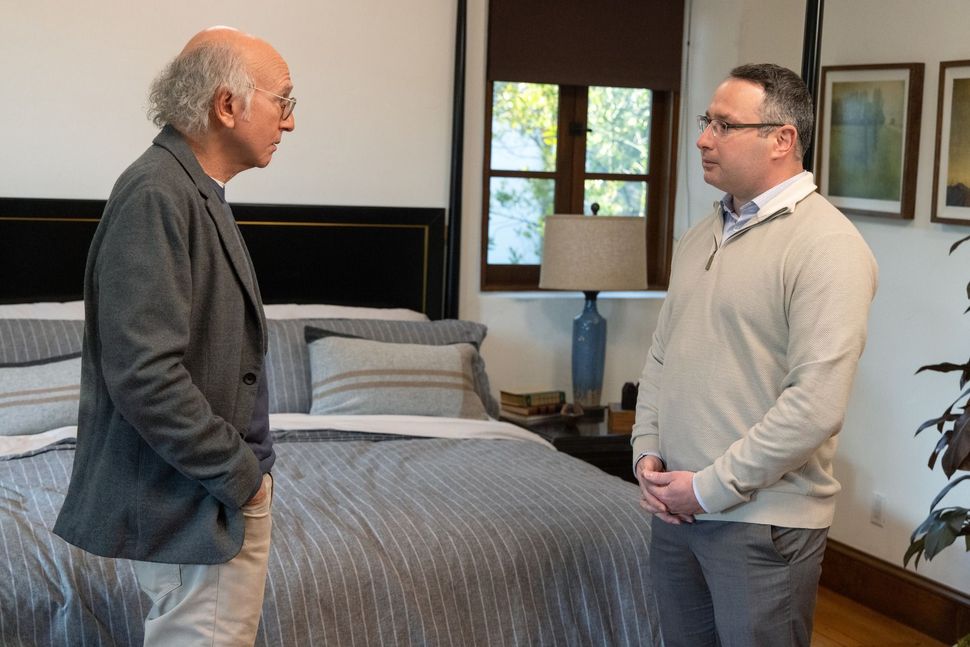 Larry David and Lt. Colonel Alexander Vindman face off on the matter of stolen shoes and pool fences on the finale of Curb Your Enthusiasm Photo by John P. Johnson/ HBO

After 11 seasons of “Curb Your Enthusiasm,” Larry David, the master of his own moral universe, finally found a worthy foil in America’s other most upstanding Jew.

It did not end well for David.

In the ethical accounting of the show, David’s score card this season is pretty dismal. He’s abetted a member of the Ku Klux Klan, wrestled with a petite female chauffeur over luggage and engaged in a love affair with a councilwoman in the hopes of changing a municipal code.

It’s that campaign to overturn the law that undoes David and, when measured against Vindman’s integrity, reveals Larry’s crusades to be beyond trivial — but, it would appear, not beyond dragging even the principled Vindman down to his level.

David has convinced his councilwoman girlfriend, Irma, to bring the repeal of a law mandating fencing around swimming pools to a vote — an issue he cares about for complicated reasons that involve the casting of his new sitcom. But to have a successful repeal, he needs to win the support of a Mormon member of the City Council who he previously upset by suggesting her husband try polygamy.

On the phone with that councilwoman, he offers, in decidedly Trumpian verbiage, to make a large donation to the Church of Latter-day Saints if she goes along with his plans to repeal. Vindman, for whom David is hosting a book event after-party, is somewhere in the house. At last, he emerges from a bathroom — specifically the master bathroom, which David doesn’t think guests should use — to confront David over his proposed quid pro quo.

“I heard the call, Larry,” Vindman says. “I’m concerned by the call.”

Vindman then says he’ll be transcribing the call — which he, echoing his own testimony to Congress, describes as “far from perfect”— and delivering it to the head of the Santa Monica City Council.

To justify his decision to call out David’s machinations, Vindman lists his host’s other infractions.

Foremost among them: Earlier in the episode, at Vindman’s book event at the LA Holocaust Museum, David stepped in dog poop on the lawn, disposed of his shoes and, when he saw it was raining outside, nabbed a pair of shoes collected from concentration camp prisoners on display in a pile at the exhibit. Needless to say, this is profoundly wrong — and not just because the 12th century Sefer Chassidim states you shouldn’t wear a dead man’s shoes.

Vindman also notes, as if the Shoah shoes incident weren’t enough to reproach David for, that David is guilty of roping off his director chair on the set of his new show so that other people don’t sit in it.

David, caught dead to rights, contends that all of his poor behavior “wasn’t half as bad as you using the upstairs master bathroom. That’s a real crime!”

In that objection, our hapless protagonist isn’t being blithe. He’s operating, as is his wont, from a rule book of his own making — one that often involves strict guidelines about bathroom use, and prioritizes the need to keep ones feet dry over the disrespect of pilfering the shoes of a murdered Jew (who, incidentally, turns out to have been Irma’s grandfather).

But what’s most wild to see is how, once Vindman enters the realm of David’s idiosyncratic moral code, he begins to legitimize it — to the point where he sees David stealing the shoes and his petty decision to attach a rope to a canvas folding chair on the set of a Hulu sitcom as worth mentioning in the same breath. By having Vindman bring up both, the episode signals that David’s obsessions rub off: In his orbit, the righteous too must consider the ethics of the “chat and cut” and one’s duty to respect wood, and so lose sight of things that actually matter.

It’s David’s curse. But, as the show never fails to communicate, it’s also a consistent blight attached to one’s wealth and status. When someone like Vindman or, say, Salman Rushdie steps into “Curb,” the moral center of their lives inevitably shifts. They are embodying themselves as celebrities, and the world of the show doubts that they can survive that kind of exposure without quibbling over the contents of sandwiches named in their honor.

Vindman is a former childhood refugee who, while working at the White House, gave stirring testimony against the then-president and, for his courage, had to be placed under security monitoring with his family. In real life, he blogs and is a Ph.D. candidate at Johns Hopkins. In “Curb,” he’s reduced to decorously delivering a transcript of a call about legislating the swimming pools of millionaires. That’s where respect for protocol lands you here. The show makes easy to imagine how even someone of Vindman’s proven moral fiber could be tainted by the concerns of too much money and too much free time.

By the episode’s end, Vindman has absconded to a lavish getaway with a beautiful woman admirer who read his book and was gripped by his televised bravery, insisting, on the way, that his companion call him “Colonel.”

Thankfully it’s all a fiction. There’s no reason to think the real Vindman is compromised. But, if only for reminding us that celebrity isn’t a reflection of moral clarity, thank God that Larry David — or at least the one he plays on TV — is.

In ‘Curb,’ not even Alexander Vindman is safe from Larry David’s warped worldview